1st T20: India have a walk in the park vs hapless South Africa, win by 8 wickets 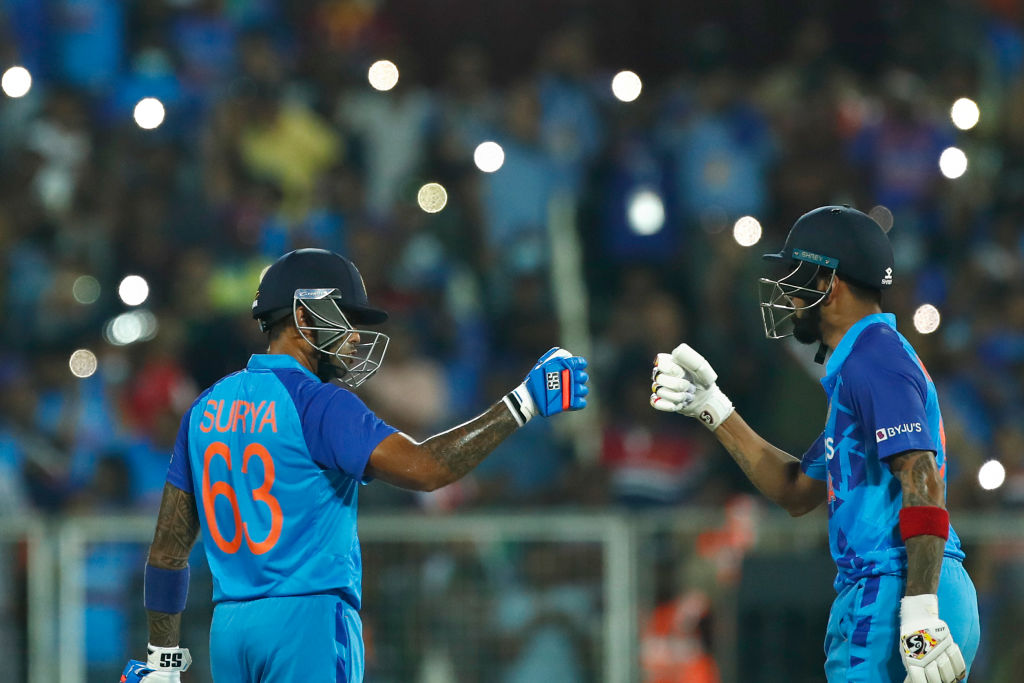 Suryakumar Yadav and KL Rahul of India of India during the 1st T20 international match between India and South Africa at Greenfield International Stadium on September 28, 2022 in Thiruvananthapura, Kerala, India. (Photo by Pankaj Nangia/Gallo Images/Getty Images)

India continued with their winning momentum from the just concluded T20 international series against Australia at the Greenfield International Stadium in Thiruvananthapuram, Kerala, where they hammered South Africa by 8 wickets in the first match of the three-game series in the shortest format.

The Africans, who are playing their second white-ball series in India in three months, had a disastrous start to their innings after India captain Rohit Sharma won the toss and asked them to bat. Indian pace spearheads Deepak Chahar (2 for 24) and Arshdeep Singh (3 for 32) ran through South Africa’s top order to reduce them to 9 for 5 in just the third over.

The visiting team tried to mend things with the help of the lower order but could only manage 106 for 8 wickets in 20 overs. Keshav Maharaj top scored for them with 41 at No.8 while Aiden Markram and Wayne Parnell hit a couple of 20s. Harshal Patel (2 for 26) and spinner Axar Patel (1 for 16) were the other wicket-taking bowlers for India.

After the break, South Africa came back hard at the hosts as pacers Kagiso Rabada (1 for 16), Anrich Nortje (1 for 32), and Parnell (none for 14) kept their chase under check and also picked up Sharma (0 off 2) and Virat Kohli (3 off 9) in the process. India were at 17 for 2 in the seventh over when in-form batter Suryakumar Yadav joined opener KL Rahul. Both of them hit unbeaten fifties to add 93 runs in 10.3 overs to take India home with eight wickets and 20 balls to spare.

Rahul made unbeaten 51 off 56 while Yadav slammed his second successive half-century (50 not out off 33) after his match-winning 69 against Australia in Hyderabad on Sunday.

Arshdeep Singh was picked as the player of the match.

The two teams now move to Guwahati in Assam for the second game on Sunday (2).