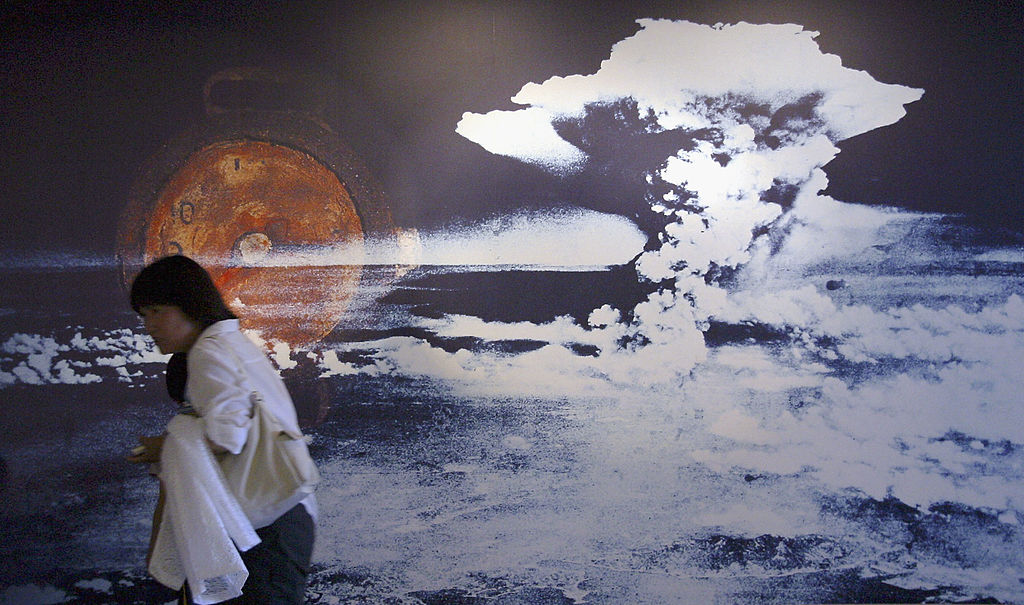 A visitor passes by a wall displaying a picture of the mushroom cloud pictured when the atomic bomb was dropped on August 6, 1945, in Hiroshima, Japan. (Photo by Junko Kimura/Getty Images)

The Japanese city of Hiroshima on Saturday (6) remembered the atomic bombing that devastated it 77 years ago as officials, including the secretary general of the United Nations, Antonio Guterres, warned against buildup of nuclear weapons and fears pile on over another such attack amid Russia’s ongoing war on Ukraine.

Speaking on the occasion at a prayer at the Hiroshima Peace Park, Hiroshima, Guterres said, “Nuclear weapons are nonsense. They guarantee no safety, only death and destruction.

“Three quarters of a century later, we must ask what we’ve learned from the mushroom cloud that swelled above this city in 1945,” he added.

The US dropped the world’s first atomic bomb on Hiroshima on August 6, 1945, destroying the city and killing 140,000 people. A second bomb was dropped on another Japanese city of Nagasaki three days later, killing another 70,000.

Japan, which was part of the Axis Powers that the US fought in the Second World War (1939-45), surrendered on August 15, marking an end to the war and its own long aggression in Asia.

Focusing on the current war in Ukraine on the occasion, Hiroshima mayor Kazumi Matsui in his peace declaration accused Russian president Vladimir Putin of using his own people as instruments of war and stealing the lives and livelihoods of innocent people in another country.

“Russia’s war on Ukraine is helping build support for nuclear deterrence,” Matsui said, appealing to the world not to repeat the mistakes that destroyed Hiroshima almost seven decades ago.

Also on the occasion, attendees at the event including government leaders and diplomats observed a moment of silence with the sound of a peace bell at 8.15 am local time, the time when the US B-29 dropped the deadly bomb on the city on the fateful day. About 400 doves, considered symbols of peace, were also released.

“I must raise my voice to appeal to the people around the world that the tragedy of nuclear weapons use should never be repeated,” he said. Japan will walk its path toward a world without nuclear weapons, no matter how narrow, steep or difficult that may be.”

Russia and its ally Belarus were not invited to the peace memorial this year. However, Russian ambassador to Japan Mikhail Galuzin on Thursday (4) said after offering flowers at a memorial epitaph in the park that Moscow would never use nuclear weapons.