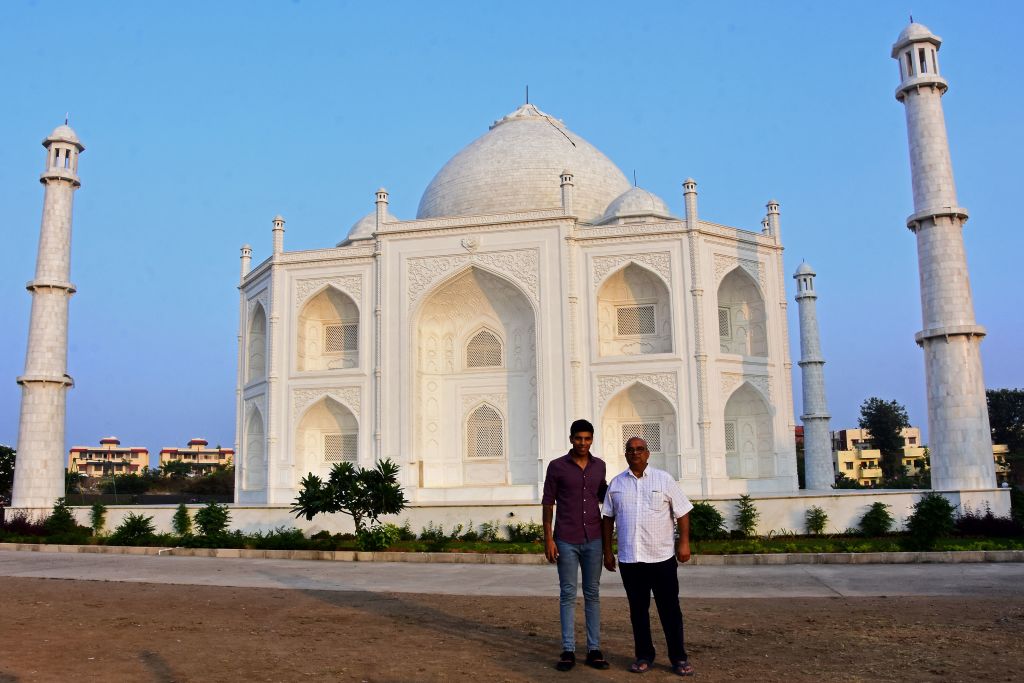 In this photograph taken on November 25, 2021, Anand Prakash Chouksey (R) and his son Kabir pose in front of a replica of the Taj Mahal at Burhanpur in India’s Madhya Pradesh state. (Photo by UMA SHANKAR MISHRA/AFP via Getty Images)

AN Indian man has made a replica of the Taj Mahal, the 17th century mausoleum which is considered to be an eternal symbol of love, as his new home to express his love for his wife.

It took Anand Prakash Chouksey, 52, three years to build the white marble-domed replica of the Taj which was built by Mughal emperor Shah Jahan in the memory of his beloved wife Mumtaz Mahal.

Till date, the Taj, which is located in Agra in the northern Indian state of Uttar Pradesh, remains one of the many wonders of the world and attracts several tourists every year.

“When it was time to build a new house I thought, ‘why not do something different?’” Chouksey said. “Every man loves his family and wife more than anything else so I made it as a gift to my wife.”

Chouksey’s Taj Mahal is located in Burhanpur in the central Indian state of Madhya Pradesh. Shah Jahan and Mumtaz Mahal also had a connection with Burhanpur.

“The Taj Mahal was built by Mughal emperor Shah Jahan in Agra as a tribute to his wife Mumtaz, but Mumtaz died giving birth to her 14th child in Burhanpur,” Chouksey was quoted as saying by The Times. “I have always wondered why he didn’t build her mausoleum in this town.”

Chouksey’s wife Manjusha, 48, is reported to love the structure built by her husband. The building has a giant marble staircase, a big atrium and four bedrooms on the first floor besides minarets and a dome like in the original masterpiece. The house in the form of the Taj measures 8,000 square feet and is a third the size of the original.

Chouksey has not disclosed how much the structure cost him.

The man also said that he faced criticism from some Hindus for his home’s “Islamic” style. He blamed the polarised ambience which is currently prevalent in India, “where everyone is spreading hatred between Hindus and Muslims”.

“They all said ‘don’t do it’, don’t build minarets and a dome, but I didn’t listen to anyone,” he told The Times. “I reckon there can’t be anything wrong with copying a symbol of love.”

It is not the mini Taj that has made the Choukseys famous. They are already known for running five educational institutes where some 6,000 students study. The couple are teachers themselves with Chouksey teaching maths and Manjusha botany.

Chouksey is not the first Indian to build a mini Taj either. In 2013, Faizal Hasan Qadri, who was 77 then, spent the savings of his life to build a small sandstone replica of the Taj in a field in the southern state of Kerala in the memory of his wife Tajamulli Begum. Kadari had promised his wife on her deathbed that he would make something that she would be remembered by.