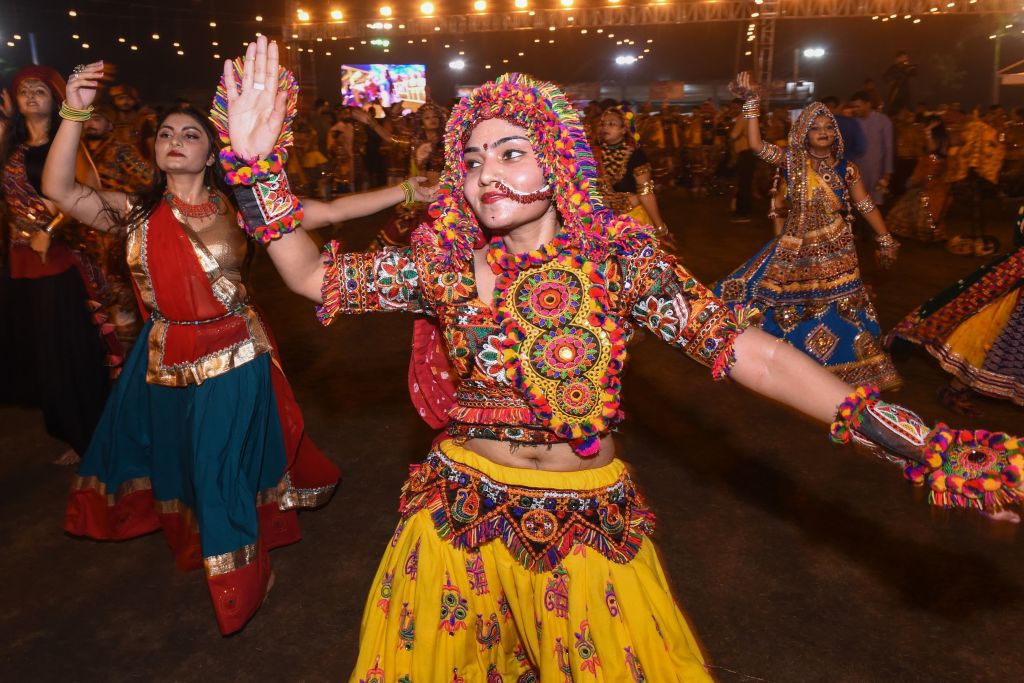 Women perform Garba dance in Ahmedabad in the western Indian state of Gujarat. (Photo by SAM PANTHAKY/AFP via Getty Images)

THE dominance of right-wing Hindu outfits in India has come to the fore once again as they have banned entry of non-Hindus at venues hosting Garba (a dance form) during the ongoing Navratri festival in the central state of Madhya Pradesh where the Bharatiya Janata Party (BJP) of prime minister Narendra Modi is in power.

At least four youths from a minority community were taken by the police to preventive custody after activists of the Bajrang Dal, another right-wing outfit, protested against their presence at a Garba venue in the city of Indore in Madhya Pradesh. They were reportedly released on Tuesday (12) after furnishing bonds, an official said.

"No Non-Hindus" Posters By VHP At Garba Venues In MP —- existing exclusionary practices will create more segregated spaces. History teaches us what happens to societies that have enacted apartheid laws. Does not help that even history has been exiled to segregated spaces. pic.twitter.com/hsRDO11bbO

“While the administration had granted permission of Garba at the venue for a maximum of 800 visitors, the numbers present there were multiple times higher than the permissible limit. Also, non-Hindu youths were present inside the Garba venue. We caught hold of them and handed them over to the Gandhi Nagar police. We won’t allow Garba venues to become ideal breeding grounds of love jihad,” Sharma was quoted as saying by India’s New Indian Express.

Additional superintendent of police, Indore West, Prashant Chaube told the daily that the four youths were taken into preventive custody under Section 151 of the Criminal Procedure Code.

“The sub-divisional magistrate of the concerned area had given permission for Garba at the venue for one day (Sunday) till 9 pm (local time) for a maximum of 800 visitors. But the numbers present at the venue were found to be around 5,000-7000, owing to which the local SDM Parag Jain cancelled the permission at 8.30 pm (local time) on Sunday. A case has been registered against the Garba organiser Akshay Tiwari under Section 188 IPC (Indian Penal Code),” Chaube said.

The government of Madhya Pradesh has allowed Garbas to be held only in residential areas while permission is required for commercial Garba events.

Defending the move to bar non-Hindus from attending Garba events, a local VHP official said it is because of the religious mixing that incidents like love jihad happens.
“The incidents of love jihad happen like this. Many non-Hindu men come under disguised identities, make friendships with Hindu girls, then begin love jihad. If the non-Hindu men really want to watch the Garba, why don’t they come with their sisters and mothers, instead of coming alone,” Chandan Sharma, secretary of the VHP’s local dharma prachar vibhag (department of religious outreach), said.

Local police sources confirmed the presence of the posters which they said they came to know from the local media. They also said that organisers of the Garba do not have objection against such posters and no complaint has been lodged.
It is not the first time that non-Hindus have faced the wrath of saffron outfits during Garba. In September 2014, Usha Thakur (currently the state’s tourism and culture minister who was then a legislator) had asked Garba organisers not to allow non-Hindus to enter the venues and that visitors be allowed after checking their valid photo identity proofs. She had also asked the women to wear dresses during the Garba dance that didn’t expose much skin.