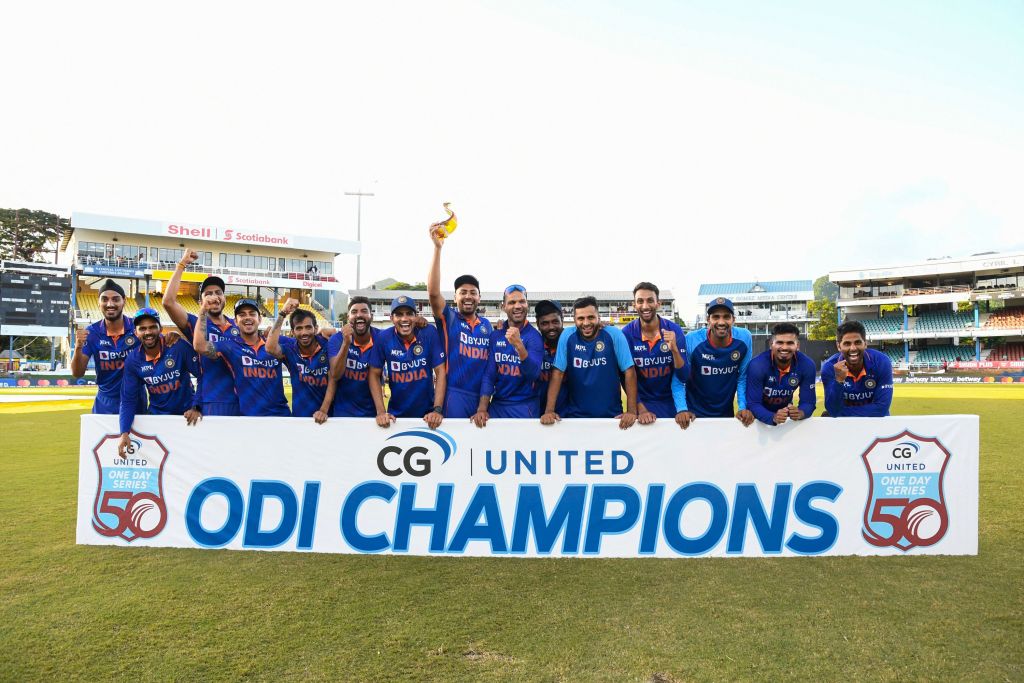 Members of the India team after winning on the third and final ODI match between West Indies and India at Queens Park Oval in Port of Spain, Trinidad and Tobago, on July 27, 2022. (Photo by Randy Brooks / AFP) (Photo by RANDY BROOKS/AFP via Getty Images)

TOP bowling spells from spinner Yuzvendra Chahal and pacers Mohammed Siraj and Shardul Thakur helped India crush West Indies by 119 runs in the rain-hit third and final ODI of the series here at Queen’s Park Oval on Wednesday (27). This was the first time that the Asian side whitewashed the Caribbeans in their den in a ODI series since they started playing bilateral series in the format in 1983.

India has completed a clean sweep of 3-0 over the hosts. India can walk away with a lot of positives after this match as their batting was great, lead from the front by openers Shikhar Dhawan (58) and Shubman Gill (98*). Setting a target of 257 in 35 overs after the match was hit by rain, the West Indies batters never looked as if they were in the game as Indian bowlers feasted on them. The hosts fell prey to a world-class bowling attack with their careless shot selection. Chahal (4/17), Siraj (2/14) and Thakur (2/17) were extremely economic with the ball and delivered timely blows to their opponent. Chasing 257, West Indies got off a nightmarish start, losing opener Kyle Mayers and Shamarh Brooks in the second over to pacer Mohammed Siraj.

Following this, opener Shai Hope and Brandon King resumed the chase for the hosts. They both maintained solid running between the wickets. King was the aggressor during the partnership. Hope-King added 47 runs to their stand before the former was stumped by wicketkeeper-batter Sanju Samson for 22 off 33 balls on a delivery by spinner Yuzvendra Chahal.

Captain Nicholas Pooran was next up on crease. The 12th over was bowled by pacer Prasidh Krishna and it turned out to be expensive, with Pooran-King smashing four boundaries in it collectively.

It was spinner Axar Patel who gave India their fourth wicket, removing King, who was looking threatening. He had scored 42 off 37 balls before he was trapped leg before wicket by the bowler.

Keacy Carty was next up on the crease. Pooran’s game became more attacking, smashing Deepak Hooda for a four and a six and Axar for a four as well. The duo took the hosts to the 100-run mark at end of 18 overs, with Pooran being the aggressor.

Shardul Thakur broke the 29-run stand between the duo, bowling out Carty for just five runs off 17 balls. At this point, half of the Caribbean line up was back in the hut at 103.

Jason Holder was the next batter to arrive on the crease. The all-rounder was making his return to white-ball cricket after a while and had a task in hand to build a solid stand with his skipper. Prasidh finally got his first wicket of the day, dismissing the danger man Pooran for 42 off 32 balls after being caught by Dhawan at mid-on.

Thakur gave another jolt to the hosts, sending back Akael Hosein for just one run after skipper Dhawan took another great catch. There was not much batting left with the West Indies except for Holder, who needed to pull off something really great to guide his team to a consolation win.

Things continued to go downhill for the West Indies, with Paul dismissed for a duck by Chahal after he was caught by Thakur at point while attempting to reverse sweep. Holder was running out of partners at this point, now joined by Hayden Walsh. Walsh was the ninth wicket down at a score of 137 after being caught by Dhawan at slips.

Jayden Seales was the last player dismissed, sent back to pavilion by Chahal. The hosts were bundled out for 137. They had lost the match by 119 runs and India had completed a 3-0 clean sweep in the series.

Chahal finished as the leading bowler for India with 4/17. Siraj and Thakur also took two wickets. Krishna and Axar got one scalp each.

Earlier, a 113-run stand between Shubman Gill and Shikhar Dhawan powered India to 225/3 in 36 overs during the rain-hit third and final ODI against West Indies here at Queens Park Oval on Wednesday.

As per Duckworth-Lewis Method, West Indies were set a target of 257 runs in 35 overs. The innings face disruption due to rain. But despite this disruption, India managed to put up a solid total on the board. Dhawan (58) and Gill (98*) continued their fine batting form and the home team bowlers were not able to do much. Shreyas Iyer also contributed a fine 44.

Electing to bat first, India was cautious for the first ten overs, mostly rotating the strike and hitting big occasionally. This cautious approach bore fruit as openers Shikhar Dhawan and Shubman Gill were able to get through the mandatory powerplay with a score of 45/0, with the duo standing unbeaten at 22 each.

After reaching their 50-run stand in 67 balls, the duo accelerated their run-making. Skipper Dhawan brought up his 37th fifty in ODIs. Dhawan-Gill brought up their 100-run stand in 118 balls.

Gill was also looking really classy with the bat at the other end and brought up his second ODI fifty, continuing his good run in the series.

The 113-run stand between the duo was broken in 23rd over. It was spinner Hayden Walsh who gave the Caribbeans a breakthrough by dismissing Dhawan for 58 off 74 balls, with skipper Nicholas Pooran taking the catch at mid-wicket. Shreyas Iyer was next up on crease. Rain interrupted play at this point, with India at 115/1 in 24 overs, with Gill (51*) and Iyer (2*).

The match resumed as a 40-over-a-side contest. After this, Gill-Iyer started showing more attacking intent with the willow, smashing boundaries and sixes. The very first over after rain went for 18 runs. The duo raced to their 50-run partnership in just 30 balls. West Indies bowlers were shocked by the sudden change in gears and it was reflected in some sloppy fielding by them.

The duo kept the scoreboard moving and added 86 runs before Shreyas Iyer was dismissed for a solid 44 off 34 balls by spinner Akeal Hosein after being caught by Keemo Paul at long-on.

Suryakumar Yadav was the next man on the crease for India. However, his poor run of scores continued as he was dismissed by Walsh after being caught for just eight runs at backward point by Shamarh Brooks.

Sanju Samson, the wicketkeeper-batter was next up on the crease. Gill-Samson carried on for a while before rain interrupted play once again.
India’s innings came to an end at 225/3 in 36 overs due to rain, with Gill (98*) and Samson (6*) unbeaten.