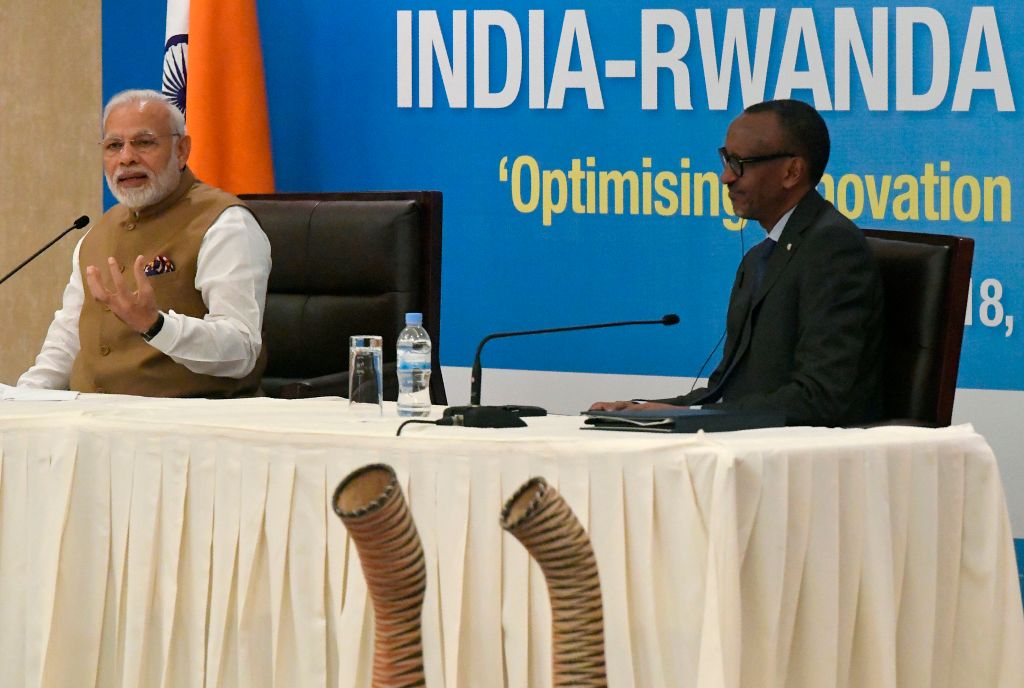 Indian prime minister Modi and Rwandan president Paul Kagame at an event in Kigali, the capital of the African nation, in July 2018. (Photo by SIMON MAINA/AFP via Getty Images)

INDIA’S minister of state for external affairs V Muraleedharan on Monday (16) reviewed the entire gamut of bilateral cooperation with Rwanda and committed to further strengthening the strategic partnership between the two countries.

The Indian minister expressed this resolve during his official visit to the Republic of Rwanda where he co-chaired the first India-Rwanda Joint Commission Meeting (JCM) held in Kigali, the capital of the African nation, on November 14 and 15, India’s ministry of external affairs said in a statement.

During the visit, Muraleedharan called on Rwandan president Paul Kagame who conveyed his greetings to Indian prime minister Narendra Modi and spoke about the strategic partnership between India and Rwanda and expressed his desire to work with India to achieve full potential of the partnership. He also invited Modi to take part in the Commonwealth Heads of Government Meeting summit to be held in Rwanda next year.

Muraleedharan spoke to Kagame about deliberations that were held in the JCM. He also recalled the Rwandan president’s visits to India and thanked him for addressing the Raisina Dialogue — India’s premier conference on geopolitics and geoeconomics – virtually in April this year.

“The two sides also discussed regional, international & multilateral issues. Both sides agreed to work with each other for the early conclusion of pending MoUs and carry forward the work under the existing institutional mechanisms. The Rwandan side expressed their thanks for the developmental aid and co-operation being provided by India,” the external affairs ministry said.

The Indian minister paid a visit to Rwanda’s state-owned Nyabarongo Hydro-electric Power project which was completed in 2015 under Indian government’s Line of Credit of $80 million. He also visited Kigali Genocide Memorial and paid floral tributes and inaugurated the India-Rwanda Entrepreneurship Development centre in Kigali, which has been built with Indian grant assistance.

Muraleedharan also interacted with the Indian community and appreciated their contribution in building socio-cultural & commercial ties between the two countries.