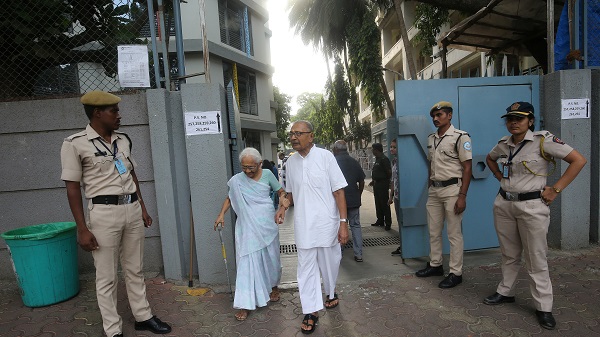 A couple leaves after casting their vote at a polling station in Mumbai, India April 29, 2019 (Photo: REUTERS/Francis Mascarenhas).

AN average 31.74 per cent voter turnout was recorded till 01.00 pm IST in Maharashtra’s 17 seats on Monday (29) as polling for the fourth and last phase of Lok Sabha elections in the state was underway.

Complaints of technical glitches in EVMs and VVPAT machines in some polling booths were addressed, an election official said.

Cricket icon Sachin Tendulkar with his wife Anjali Tendulkar cast their votes at a booth in Mumbai.

Their son Arjun Tendulkar, a budding left arm pacer, voted for the first time as he turned 18 years’ old recently.

So far, Nandurbar Lok Sabha seat recorded highest polling at 40.05 per cent while Kalyan constituency saw lowest voter turnout of 25.31 per cent, according to an official statement.

As many as 31.1 million voters spread across the Mumbai metropolitan region and northern and western Maharashtra are eligible to exercise their franchise to decide the fate of 323 candidates in the fray in these 17 seats.

Around 40 polling booths in these constituencies, including 26 in suburban Mumbai, are being managed women.