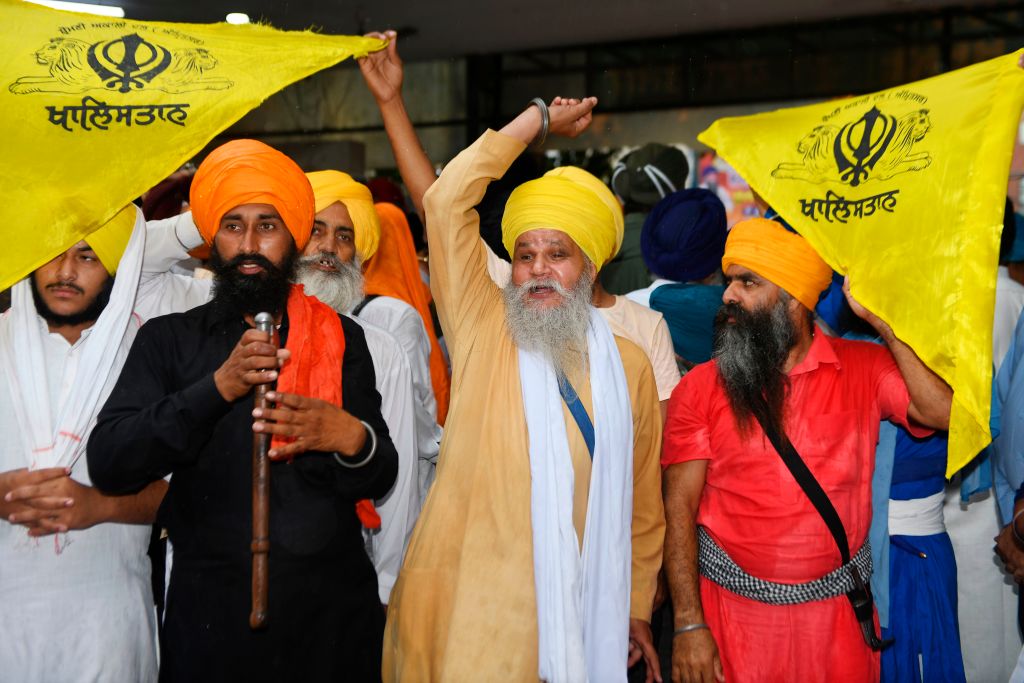 Sikh radical activists shout pro-Khalistan slogans on the occasion of the 36th anniversary of Operation Blue Star, at the entrance of the Golden Temple in Amritsar in the northern Indian state of Punjab on June 6, 2020. – (Photo by NARINDER NANU/AFP via Getty Images)

KHALSA Television Limited has surrendered its licence to broadcast in the UK after an investigation by the country’s media watchdog found its KTV channel breached broadcasting rules with Khalistani propaganda and issued a draft notice to revoke last month.

The Office of Communications (Ofcom) announced on Tuesday that having received Ofcom’s draft revocation notice on May 26, Khalsa Television Limited has now surrendered its licence. The revocation notice followed a suspension notice to the company over a ‘Prime Time’ programme, broadcast on KTV on December 30 last year, for a breach of the Broadcasting Code with content likely to “encourage or incite the commission of a crime or lead to disorder”. The communications regulator said the 95-minute live discussion programme included material likely to “incite violence”.

“On 13 May 2022, Ofcom issued a draft notice to revoke the broadcasting licence of Khalsa Television Limited, which Ofcom had suspended after its channel KTV broadcast material that was likely to incite violence,” Ofcom said in a statement.

“This was the third time within four years that this licensee had been found in breach of our rules on incitement to crime due to programmes inciting violence. The KTV television channel served the Sikh community in the United Kingdom,” the statement said.

KTV had been off air since March 31, when Ofcom suspended Khalsa Television Limited’s licence following a serious breach of its broadcasting rules. The investigation found that the presenter of the ‘Prime Time’ show, made several statements which, taken together, “promoted violence, including murder, as an acceptable and necessary form of action to further the Khalistani cause”.

If this broadcaster, or those controlling it, were to apply for a broadcast licence in the future, Ofcom’s commencement of this revocation process, our decision today and the full compliance history of the former licensee would be major factors, the media watchdog noted in its update this week. KTV operated under a licence held by Khalsa Television Limited.

In February, the channel received Ofcom’s “Preliminary View” notice and in representations objected to its translation and analysis of the programme. Ofcom said this failed to provide “any substantive details of the objection” and offered it another chance to respond last month.

In its representations, KTV reiterated that the programme in question did not contain an incitement or call to violent action in breach of Rule 3.1 and provided an example of what it said was Ofcom’s “misunderstanding” of the words used by the presenter. Ofcom previously also took action against the channel, including in February last year when it imposed a total fine of GBP 50,000 on the channel for broadcasting a music video and a discussion programme that was deemed an indirect call for British Sikhs to commit violence and also contained a terror reference.

On its website, KTV describes itself as an exciting channel, airing a range of cultural, educational and entertaining programmes for audiences of all ages. It says it prides itself in being “completely independent, impartial and honest”.