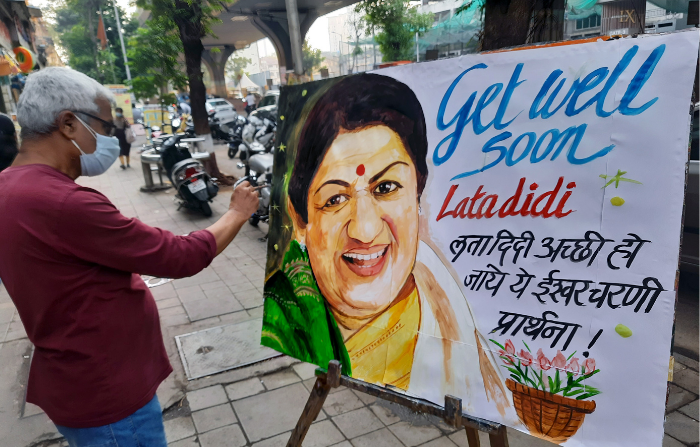 An art school teacher gives a finishing touch to a painting of singer Lala Mangeshkar reading ‘Get Well Soon Lata Didi’, as she is admitted at a in Mumbai in the western state of Maharashtra after testing positive for Covid-19. (ANI Photo)

LEGENDARY Indian singer Lata Mangeshkar continued to remain in the intensive care unit (ICU) of a hospital in Mumbai in the western state of Maharashtra.

The 92-year-old recently tested positive for Covid-19 with mild symptoms and was admitted to the Breach Candy Hospital in the Maximum City.

Confirming that Mangeshkar remained in the ICU, associate professor Dr Pratit Samdani from the hospital said she would be kept in the hospital for some time and asked her admirers to pray for her.

“She continues to be in the ICU under observation. We have to wait and watch. Pray for her recovery. She will continue to remain in the hospital,” Samdani told the Press Trust of India.

On Thursday (13), Mangeshkar’s niece Rachana Shah had said the singer is doing well.

“She is doing well and we are happy about it. Everyone’s prayers have worked. Kindly, keep our privacy in mind,” Shah told PTI.

According to Shah, Mangeshkar was admitted to the ICU as she required “constant care” due to her age.

Regarded as one of Indian cinema’s greatest singers, Mangeshkar started her career at the age of 13 in 1942 and has over 30,000 songs to her credit in several Indian languages.

The singer, who is known as ‘Nightingale of India’, has been honoured with numerous awards and honours, including Bharat Ratna (India’s highest civilian award), Padma Bhushan, the Padma Vibhushan and the Dada Saheb Phalke Award, besides multiple national film awards.