Modi Claims 40 Trinamool Congress MLAs In Touch With Him 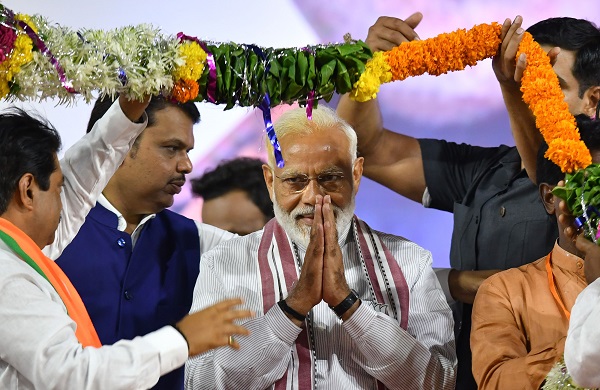 INDIAN prime minister Narendra Modi claimed on today (29) that 40 Trinamool Congress (TMC) party MLAs were in touch with him and will desert their party once the BJP wins the general elections.

He also accused TMC supremo Mamata Banerjee of nepotism, insisting she wants to politically establish her nephew in West Bengal.

Modi also assailed her over her prime ministerial ambitions, saying “Didi, Dilli door hai (Delhi is far away for you).

“Forty TMC MLAs are in touch with me and all your MLAs will desert you once the BJP wins the elections. Political ground has slipped from under your feet,” Modi told an election rally in Sreerampur, targeting the West Bengal chief minister.

Mocking Banerjee for often losing her cool as she was “sensing defeat”, Modi said she cannot even dream of becoming the prime minister.

“With just a handful of seats, ‘Didi’ you can’t reach Delhi. Delhi is far away. Going to Delhi is just an excuse. Her real intention is to politically establish her nephew,” he said.

Banerjee’s nephew Abhishek is a sitting MP from Diamond Harbour and the TMC candidate for the seat.

Lashing out at opposition parties for questioning the credibility of EVMs, Modi said his rivals have moved on from abusing him to criticising EVMs, as they face “imminent defeat”.

“Earlier only Modi was abused, now even EVMs are being abused. The opposition is doing so as it faces imminent defeat,” he said.

He also accused the state’s ruling party of rigging elections, claiming its “goons” were preventing voters from exercising their franchise.