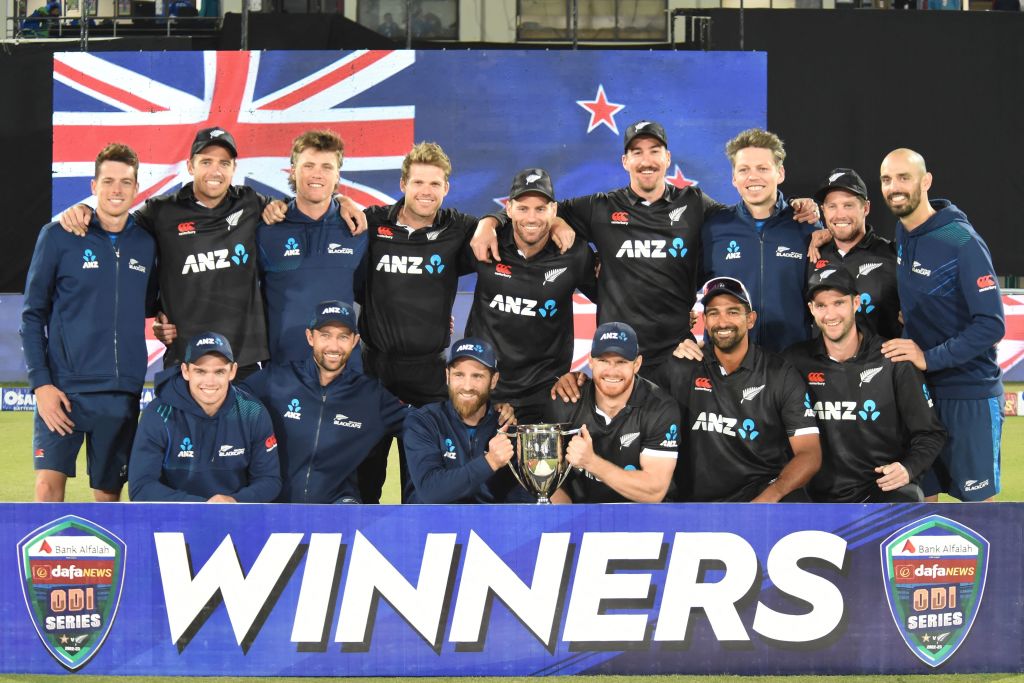 New Zealands players pose with the winners’ trophy on the third and final one-day international (ODI) cricket match between Pakistan and New Zealand at the National Stadium in Karachi on January 13, 2023. (Photo by ASIF HASSAN/AFP via Getty Images)

Glenn Phillips smashed an unbeaten half-century as New Zealand secured a series victory over Pakistan with a two-wicket win in the third and final one-day international in Karachi on Friday (13).

Phillips scored 63 off 42 balls, hitting four sixes and as many fours, to rescue New Zealand from a precarious 181-5 in their pursuit of a 281-run target.

Walking in to bat with New Zealand needing 100 off 87 balls, Phillips added 64 for the seventh wicket with Mitchell Santner, who scored 17 in a match-turning stand.

Skipper Kane Williamson contributed with 53 and Devon Conway struck an equally steady 52 before Phillips finished off the chase with 11 balls to spare.

Phillips completed his first ODI fifty off just 28 balls, but he was dropped the following delivery when wicketkeeper Mohammad Rizwan failed to hold a catch off spinner Usama Mir.

New Zealand’s win sealed their first ODI series victory in Pakistan in six attempts and kept them top of the one-day rankings.

“He (Phillips) wasn’t feeling great but he came out and played with a lot of freedom,” said Williamson whose team have now won seven of their last eight ODI series.

“I thought we were in the game at the halfway stage but made a few errors. For Glenn to play that knock, and credit to Pakistan as well. It was a hard-fought series.”

Pakistan captain Babar Azam said: “When Rizwan and Fakhar played it looked like we’d touch 300 but when wickets fall, it is difficult for new batters.

“We couldn’t quite execute in the last 10 overs with the ball.”

Williamson steadied the innings during his stands of 65 with Conway for the second wicket and then another 52 with Daryl Mitchell (31) for the next, but New Zealand lost four wickets in the space of 45 runs.

Off-spinner Agha Salman (2-42) dismissed Conway and then had Mitchell caught off a miscued reverse sweep to break the two partnerships. Williamson was run out for the fourth wicket.

Opener Zaman laid the foundations for a good Pakistan total.

The left-hander hit 10 fours and a six after Pakistan won the toss and opted to bat first.

Zaman lifted Pakistan from 21-2 during a third-wicket stand of 154 with Rizwan, who made a polished 77 featuring six boundaries.

Pakistan made a poor start as they lost Shan Masood without scoring and Azam, the world’s top-ranked ODI batsman, for just four.

Azam, who had two half-centuries in the first two matches, was stumped by Tom Latham off spinner Michael Bracewell in the seventh over.

It was left to Zaman to rebuild the innings and he took a sharp single to reach his eighth hundred, his first three-figure ODI score in Pakistan.

Leg-spinner Ish Sodhi broke the stand by bowling Rizwan, while Zaman was run out as he tried to steal a quick single.

Salman gave the innings some late impetus by hitting 45 off 43 balls, while New Zealand seamer Tim Southee finished with 3-56.