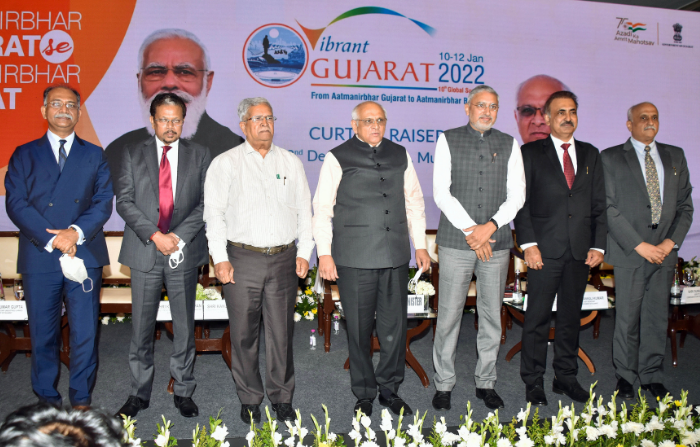 Bhupendra Patel (fourth from left), the chief minister of the western Indian state of Gujarat, along with some state ministers and other dignitaries during a pre-event for Vibrant Gujarat Global Summit 2022 in Mumbai in December 2021. (ANI Photo)

NOT long after sources in the government of the western Indian state of Gujarat said the upcoming Vibrant Gujarat Global Investor Summit was set to go ahead as per schedule despite the surge in Covid cases, the state authorities decided to postpone it.

The 10th edition of the event, which has already been deferred by a year due to the pandemic, was set to be inaugurated by prime minister Narendra Modi in Gandhinagar, the state capital, on January 10, and continue till January 12.

An official communication from the office of state chief minister Bhupendra Patel said the latter, after analysing the situation, decided to postpone the high-profile event as of now, in view of the rising number of Omicron cases in the state.

The summit, which was supposed to be attended by a number of dignitaries both from India and abroad, is aimed at attracting investments and delegations. A number of partner nations and chief executive officers of top firms besides heads of state and officials from across the globe had confirmed their presence on the occasion.

The summit, which took off in 2003 when Modi was the chief minister of Gujarat, has established the state’s position as the world’s gateway to India.

On Wednesday, Gujarat reported 50 new cases of the Omicron variant, taking the tally of such cases in the state to 204, according to the state’s health department.

Besides, 16 patients of the variant were discharged from hospitals which took the total number of recoveries to 112.

The state government has, among measures, imposed night curfew between 5 pm and 11 am local time to contain the outbreak.

Gujarat will go to polls later this year.