WATCH: An England player hitting sixes at Lord’s but he is not a cricketer! 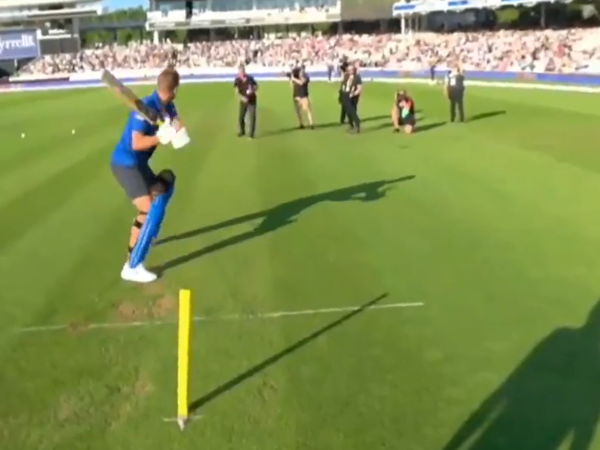 Harry Kane hitting one of his sixes at the Lord’s Cricket Ground (Picture: Twitter screengrab from @CricResanth)

There is no dearth of big hitters in England’s national cricket team. However, this week, the iconic venue of Lord’s remained witness to somebody who is not a member of the Three Lions cricket team slamming sixes at will.

It was none other than Harry Kane, the captain of the England football team. The 29-year-old, who also plays for Tottenham Hotspur, was present at the cricket ground ahead of the match between London Spirit and Manchester Originals in the ongoing The Hundred tournament. He took up a cricket bat on the occasion and along with his Spurs colleague Matt Doherty, was seen belting the ball easily in a six-hitting challenge.

The Hundred later shared a video of Kane playing the big shots off friendly full tosses.

Kane also shared a video of his presence at Lord’s.

Kane is not a stranger to cricketers. He is known for his rapport with ace India batter Virat Kohli and claims to be a supporter of Kohli’s team in the Indian Premier League — Royal Challengers Bangalore.

Meanwhile, Kane’s Hotspur started their campaign at the Premier League with a thumping 4-1 victory over Southampton. They will next play Chelsea on Sunday (14).