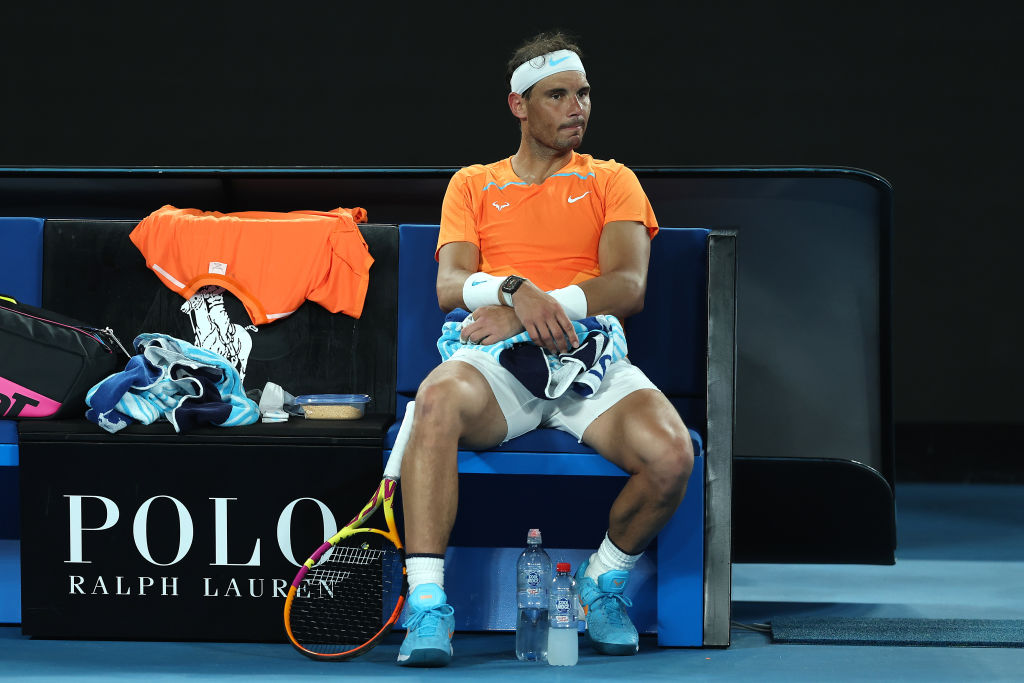 Rafael Nadal of Spain looks dejected in their round two singles match against Mackenzie McDonald of the United States during Day 3 of the 2023 Australian Open at Melbourne Park on January 18, 2023 in Melbourne, Australia. (Photo by Cameron Spencer/Getty Images)

Australian Open 2023 witnessed a shocking outcome on Wednesday (18), its third day, when defending champion Rafael Nadal crashed out with a straight-set loss to world No.55 Mackenzie Macdonald in the second round. What made it even more heart-shattering for the Spaniard’s fans is that the 36-year-old struggled with an apparent leg or back injury for the latter part of the match, which virtually turned him into a pedestrian and it seemed he could retire at one point.

However, it didn’t happen but Nadal lost the game 4-6, 4-6, 5-7 against the American. And the moment when a visibly uncomfortable Nadal, winner of 22 Grand Slam titles, was forced to go off the court for an injury check-up, his wife Maria Francisca Perello was seen trying to fight back tears.

Things we never wish to see 💔

It's all tears in the stadium as @RafaelNadal struggles with his fitness 😕#SonySportsNetwork #SlamOfTheGreats #RafaelNadal #AO2023 pic.twitter.com/TNSKataWjz

Nadal never looked in control at the beginning against a determined opponent and struggled to score points on his first serve. During the first set, he made a number of unforced errors, and kept losing service games at crucial moments to squander the first two sets. He still tried to make a comeback in the third one despite the worsening injury conditions but could not make it,

Macdonald later showered praise on Nadal in the post-match interview calling him an “incredible champion”.

The 27-year-old said that Nadal tried his best even after the injury and even reminisced about their last meeting – a match where he just won four games.

“He’s an incredible champion, he’s never going to give up regardless of the situation so even closing it out against a top guy like that is always tough,” Macdonald said on the court.

“I was trying to stay so focused on what I was doing and he kind of got me out of that with what he was doing. But I kind of just kept focusing on myself and got through,” he added.