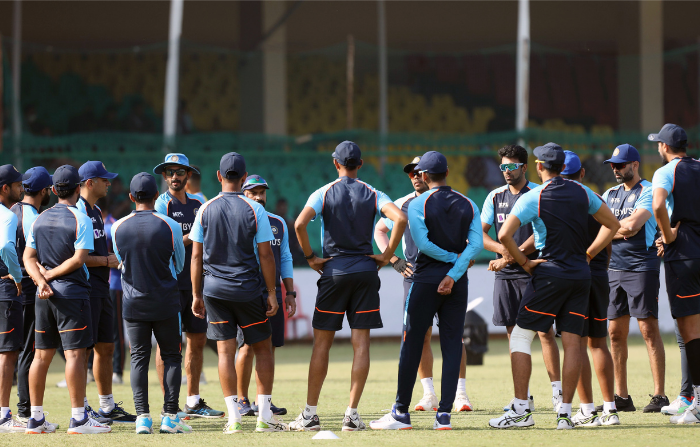 India cricketers at a practice session ahead of their first Test match against New Zealand in Kanpur on November 23, 2021. (ANI Photo)

THE Board of Control for Cricket in India (BCCI) landed in a controversy ahead of India’s Test series against New Zealand starting in Kanpur on Thursday (25) over reports that it has banned beef and pork in any form in the new diet regime of the national team.

It has also been reported that the players have been instructed to consume meat in only halal form.

“According to the new dietary plan of the Indian cricket team, players aren’t allowed to eat pork and beef in any form and variety in order to keep themselves fit and healthy,” Sports Tak reported.

“If anyone wants to have meat then it should be only in halal form, players can’t eat any other form of meat whatsoever,” it added.

The reports have seen the board facing a backlash as a section has protested the decision saying banning all forms of meat except halal hurt the sentiments of the Hindu community. The Muslim community, on the other hand, largely prefer ‘halal’ meat.

As per the reports, the Indian board has introduced the new diet plan to ensure that the players remain fit and healthy for their upcoming assignments.

Gaurav Goel, spokesperson for India’s ruling Bharatiya Janata Party, blasted the BCCI over the decision and sought immediate withdrawal of the recommendation.

“The players can eat whatever they want but who has given BCCI the right to introduce ‘halal’ meat. This is illegal and we will not allow it,” Goel said in a video posted on Twitter.

“This decision is not right. It should be withdrawn immediately,” he said.

No official in the BCCI was ready to speak about the catering and menu document that recommended ‘halal’ meat to the Indian cricketers during their stay in Kanpur for the first Test after the Press Trust of India sought their remarks.

The document is believed to have been prepared by the support staff and medical staff that care about the players’ dietary requirements.

In the ‘halal’ form of slaughter, animals are killed with a cut to the jugular vein and are left to bleed dry. In the ‘jhatka’ method which is more preferred by the Hindus and Sikhs, they are slaughtered immediately.

A former India cricketer told PTI that exclusion of beef and pork items is not surprising though it was never documented earlier.

“During my time in the team, I have never seen any beef or pork items being served on match days in the dressing room. At least, never in India. So I don’t think apart from putting pen to paper, anything new has been done,” he told PTI on conditions of anonymity.

“Before anyone tries to read between the lines, beef, with its excessive fat content just like goat meat isn’t advisable for cricketers.

“We were always advised to have lean protein which is generally grilled chicken and fish,” he said.

India will play the first Test under the captaincy of Ajinkya Rahane while regular Test skipper Virat Kohli will return to lead the side in the second Test in Mumbai starting December 3.