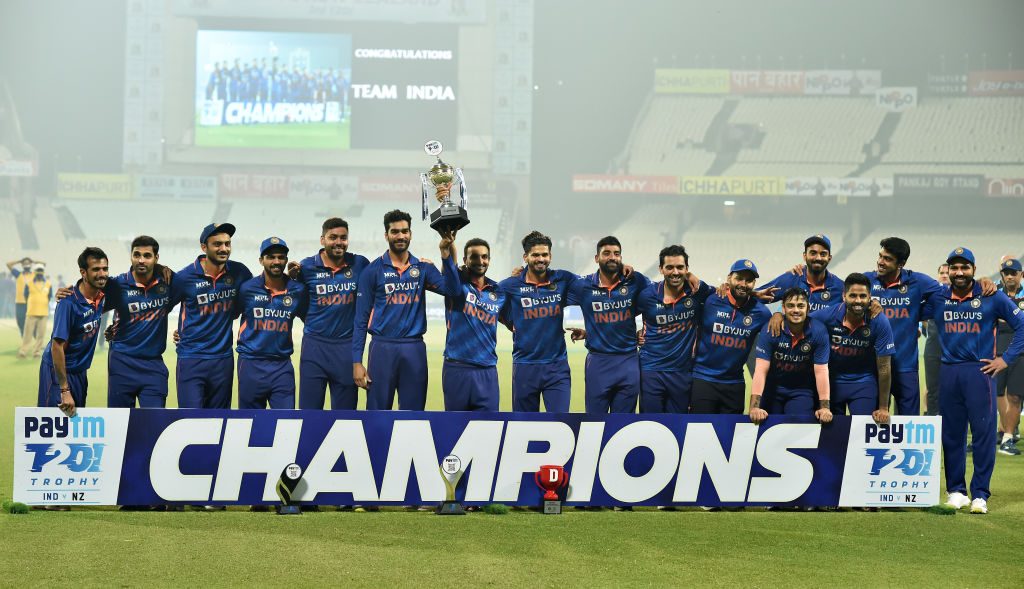 India players pose with the trophy after winning 3-0 the T20 international series against New Zealand 3-0 at Eden Gardens in Kolkata, India, on November 21, 2021. (Photo by Pankaj Nangia/Getty Images)

The win meant India swept the series 3-0 against the Kiwis who finished runners-up in the just concluded T20 World Cup in the United Arab Emirates, losing to trans-Tasman rivals Australia in the final.

Sharma won the toss and elected to bat and along with Sharma, his fellow opener Ishan Kishan (29), the two Iyers – Shreyas (25) and Venkatesh (20) – and Deepak Chahar (21 not out) helped the hosts put up a total of 184 for 7 in the allotted 20 overs. For the visitors, spinner Mitchell Santner, who captained the visiting side for this game, took three wickets for 27 runs in four overs.

AB de Villiers bid goodbye to all forms of cricket

For New Zealand, no other batter apart from in-form opener Martin Guptill (51) could last long at the crease and they lost half their side for only 76. Wicket-keeper-batter Tim Seifert made 17 and Lockie Ferguson 14 and the Black Caps were eventually bowled out for 111 in 17.2 overs.

For India, Harshal Patel, the hero of the second match in Ranchi, took two wickets besides Patel’s three while Chahar, Harshal Patel and Venkatesh Iyer took one wicket each.

India and New Zealand will now play a two-Test series starting November 25. The first match will be played in Kanpur where India will be led by Ajinkya Rahane and the Kiwis by Kane Williamson.