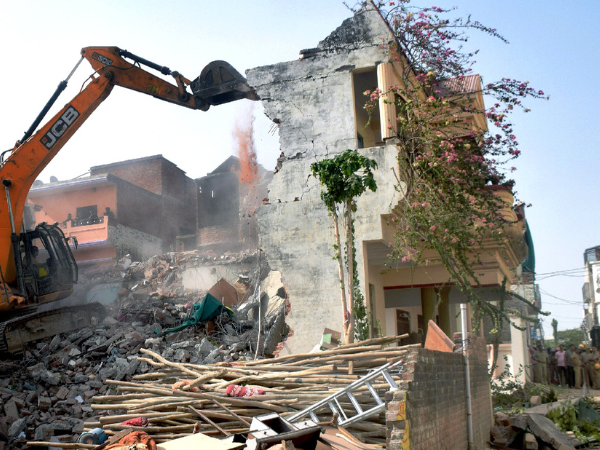 A bulldozer demolishes the residence of Javed Ahmed, who is allegedly the key conspirator of a violent protest in Prayagraj against suspended Bharatiya Janata Party leader Nupur Sharma over her alleged remarks on Prophet Muhammad on June 12, 2022. (ANI Photo)

AMID the row over the Bharatiya Janata Party (BJP) government of Uttar Pradesh bulldozing properties of members of the minority Muslim community over street protests, the Indian Supreme Court has sought an affidavit from the state over the same.

The top court heard a petition that alleged that the Yogi Adityanath government was targeting the Muslims and demolishing the properties of its members using bulldozers. The petitioners also alleged that no notice was served to them prior to the demolition.

The plea was filed by Jamiat-Ulama-I-Hind which sought directions to Uttar Pradesh authorities to ensure that no further demolition of properties took place in the BJP-ruled state without following the due process.

Advocate Nitya Ramakrishna, who appeared for the Muslim body, said bulldozing cannot be a criminal justice measure and added that the Supreme Court mentioned that demolitions cannot be retaliatory and a rule of law must prevail, India Today reported.

The state government said no law was violated during the demolition drives and rubbished the allegation that no notice was served before the bulldozers were deployed.

The apex court said it was not asking all actions to stop but added that “all such actions must be within the ambit of the law”.

“The government will get time to file its objections. We should ensure their [petitioners’] safety in the meantime. They’re also part of the society. When someone has a grievance, they have a right to have it addressed. Such demolitions can only happen as per law. We’ll hear the case next week,” the court said.

The Uttar Pradesh government’s affidavit will have to contain details of the notices it sent and action it took.

The matter will be heard again on June 21.