Hindi not competing with other Indian languages: Amit Shah 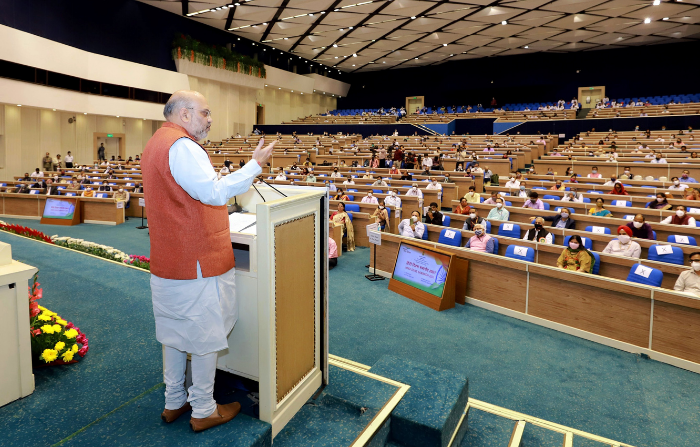 INDIA on Tuesday (14) observed Hindi Diwas (Hindi Day as the language was adopted as the country’s official language on this date in 1949) and on the occasion, home minister Amit Shah said while Hindi is India’s official language, it will prosper only through co-existence with other Indian languages.

Shah, who hails from the western Indian state of Gujarat, urged people to speak in their mother tongue. Stressing that Hindi is not competing with other Indian languages, Shah said, “Different opinions come. But I want to clarify that Hindi is not competing with any other Indian language. It is actually a friend of all Indian languages and it will prosper only with co-existence.” He was speaking at the Hindi Diwas programme organised by his ministry’s department of languages at the Vigyan Bhavan, New Delhi.

The top minister’s words on the day in 2021 were in marked contradiction with what he had said in his speech on the occasion in 2019. Then, he pushed for the idea ‘One Nation, One Language’ and said that it was only Hindi that could unite the entire nation.

His remarks faced a backlash, especially from the opposition parties from South India, a region which has historically opposed the idea of imposition of Hindi.

“There is no need to hesitate, no need to suffer any inferiority complex. When the PM speaks in Hindi at the highest of international platforms, what are we worried about? Those days are gone when we used to think how we will be judged if we speak in Hindi. You will be judged by your work, your ideas, not by your language,” Shah said, claiming that many countries have made progress by doing all their work, including in the field of science and technology, in their own languages.

Shah advised parents to converse with their children in their mother tongue at home even if they are studying in English-medium schools.

“No foreign language can connect you with this country’s core thoughts. If you abandon your language you will be cut off from your roots. Such people will never prosper,” Shah said.

“Earlier when Indian leaders went abroad and spoke on the international stage, hardly anyone in their own country understood what they were saying. But Atal (Bihari Vajpayee) ji started and Prime Minister Narendra Modi has now made it a tradition to speak in India’s official language on all international stages,” Shah said.

Shah said during the freedom struggle, India’s local languages had a prominent role and all key leaders including Mahatma Gandhi, Jawaharlal Nehru and Sardar Vallabbhai Patel emphasised on the use of local languages. “Gandhiji said without knowing local languages, you cannot understand this nation’s consciousness,” Shah said.

Hindi Diwas was not celebrated in 2020 owing to the pandemic.