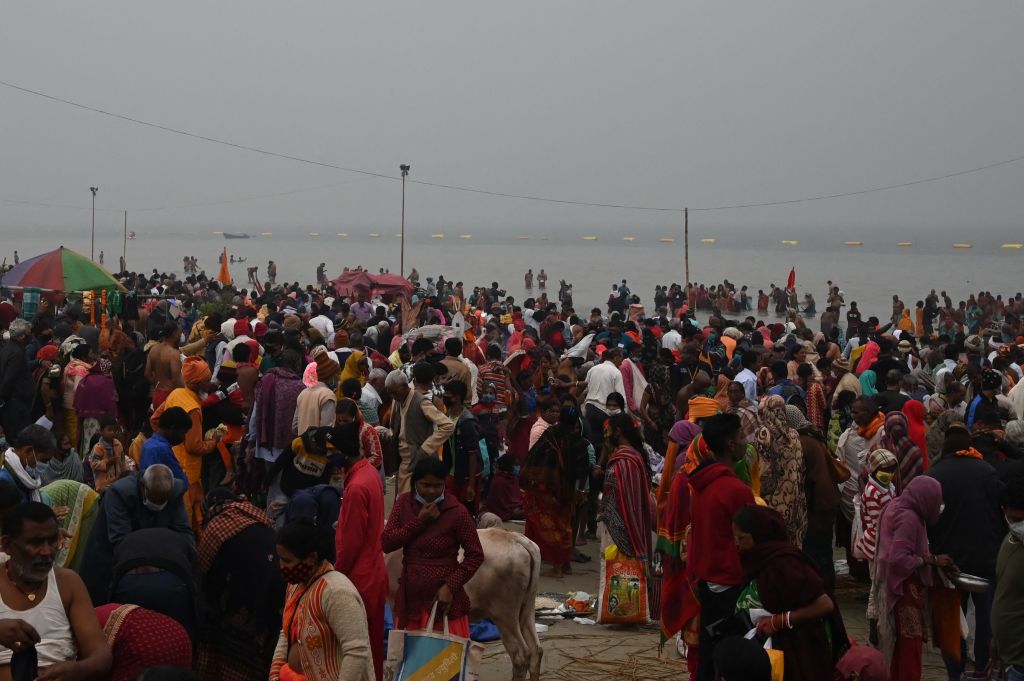 Hindu pilgrims perform rituals after taking a holy dip at the confluence of Ganges and the Bay of Bengal during the Gangasagar Mela on the occasion of Makar Sankranti, a day considered to be of great religious significance in Hindu mythology, at Sagar Island, around 150 kilometres south of Kolkata, the capital of the eastern state of West Bengal, on January 14, 2022. (Photo by DIBYANGSHU SARKAR/AFP via Getty Images)

DRONES were deployed to spray holy water from the Ganges river on several thousand Hindu pilgrims at the Gangasagar Mela (Gangasagar fair) held on the festive occasion of ‘Makar Sankranti’ in the eastern Indian state of West Bengal on Friday (14) to reduce crowding at the time of resurgence of Covid-19 cases in the country.

Last year, the Maha Kumbh Mela, another mega Hindu festival held in the Himalayan state of Uttarakhand, came under the scanner as it was found to be a “superspreader” event after the government led by the Hindu nationalist Bharatiya Janata Party (BJP) refused to ban it. Later, the event was blamed for a devastating outbreak of the second wave.

Officials are more careful this time and even as the event could not be stopped completely, they have continuously campaigned against mass gathering and for observing Covid protocol.

AFP cited officials as saying that around three million people are expected to assemble for the religious fair’s climax on Sagar Island, where the Ganges meets the Bengal of Bengal, and they include ash-smeared and dreadlocked ascetics.

At the crack of dawn, there was a sea of people,” a local official named Bankim Hazra told AFP over telephone.

“Holy water from the river Ganges was sprayed from drones on pilgrims… to prevent crowding,” he said.

But the saints and many of the devotees were still determined to take the dip.

“But the saints and a large number of people were bent on taking the dip… Pilgrims, most of them without masks, outnumbered the security personnel,” Hazra said in a tone of admission.

While an AFP photographer said the event saw less attendance this year du to rain but yet there was a huge number of people, most of whom did not care to wear masks.

One law-keeper at the event said it was “impossible” to enforce Covid restrictions.

“Most pilgrims are bent on defying the rules. They believe that God will save them and bathing at the confluence will cleanse all their sins and even the virus if they are infected,” he said.

While fatalities during the current surge have not been as devastating as it was during the second wave in April-May last year, authorities have asked people to not become complacent and defy Covid rules.

The Calcutta High Court in Bengal on Friday allowed the Gangasagar Mela to proceed.

Amitava Nandy, a virologist from the School of Tropical Medicines in Kolkata, the capital of Bengal, said the government “has neither the facilities nor the manpower” to test everyone attending the event or impose social distancing.

“A stampede-like situation could happen if the police try to enforce social distancing on the river bank,” Nandy told AFP.

The devotees were not complaining though.

Sarbananda Mishra, a 56-year-old school teacher from the neighbouring state of Bihar, told AFP: “Faith in God will overcome the fear of Covid. The bathing will cleanse them of all their sins and bring salvation.”

“Death is the ultimate truth. What is the point of living with fear?” he asked.