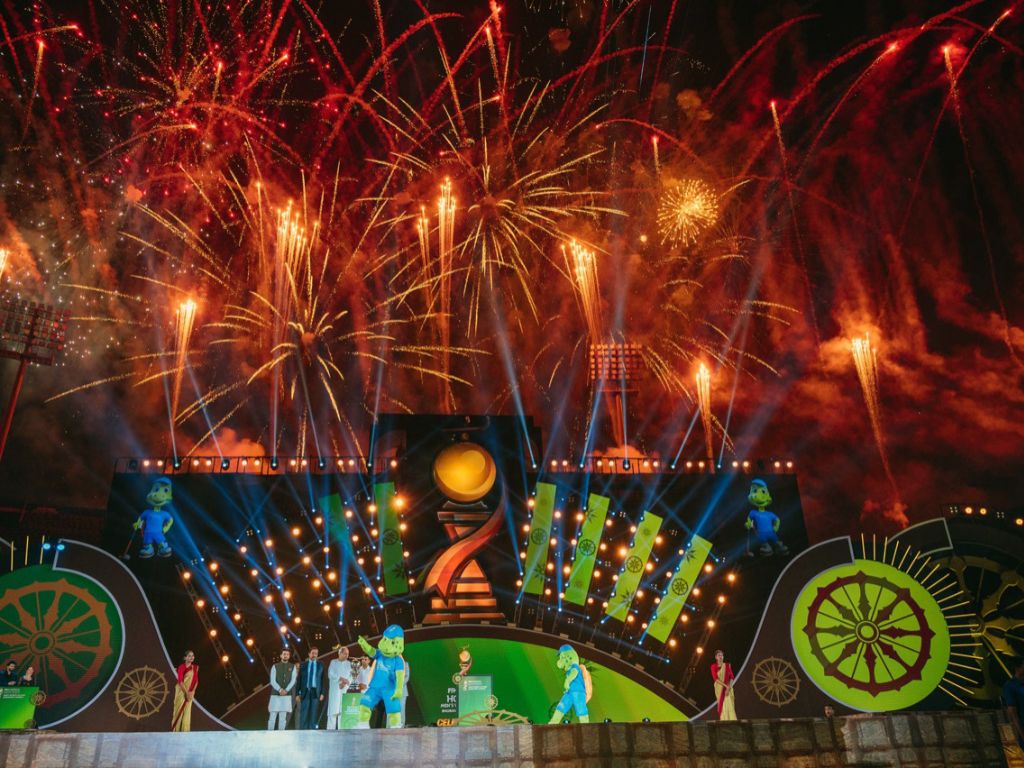 Dignitarues at the opening ceremony of FIH Men’s Hockey World Cup 2023, in Cuttack in teh eastern Indian state of Odisha, on Wednesday, January 11, 2023. (ANI Photo)

The Barabati Stadium in Cuttack in the eastern Indian state of Odisha, packed to the rafters with 45,000 fans, bore witness to the spectacular trophy celebrations that marked the start of the FIH (International Hockey Federation) Odisha Hockey Men’s World Cup 2023 Bhubaneswar-Rourkela on Wednesday (11) evening.

The evening began with a transcendental dance performance led by Odissi dancing legend Guru Aruna Mohanty and his troop, cheered on loudly by the local crowds.

Culturally auspicious, the dance reflected the innate spirit of Odisha and paid tribute to its rich heritage. The official anthem of the FIH Odisha Hockey Men’s World Cup 2023, “Hockey Hai Dil Mera” was then performed live by the composer of the anthem, Pritam along with the 11 singers who sang the original song.

The anthem set the stage for the unveiling of the FIH Men’s World Cup trophy as FIH President Tayyab Ikram was joined on the stage by the chief minister of Odisha, Naveen Pattnaik; Indian sports minister Anurag Thakur; and the president of Hockey India, Dilip Tirkey.

FIH president Tayyab Ikram took to the podium first and said, “I love the song ‘Hockey Hai Dil Mera’! Namaskar to the fans in the stadium! Thank you to the Chief Minister of Odisha, Shri Naveen Pattnaik and the people of Odisha. I carry the thanks of the world of hockey and players of hockey from all over. I also wish to thank the central government and Indian Prime Minister, Narender Modi for his support of hockey.

“I heard everyone mention that Odisha is the land of culture and heritage. I want to add that this is also the land of Hockey! One of the world’s best hockey stadiums is now open in Rourkela where the world’s best hockey players are about to perform, and they have already declared this one of the best hockey facilities in the world. This is an honour for the International Hockey Federation and all its members and we are all with you on this journey through the World Cup and forever beyond.”

Thakur said, “This is a great moment to be hosting the hockey world cup & every Indian is excited to watch it! I commend the efforts made by the state of Odisha and Hockey India in putting together what promises to be a fantastic edition of the Hockey World Cup and also for giving India one of the best hockey stadiums in the world, in Rourkela.”

Addressing a cheering crowd, Patnaik, who himself was a hockey player in his younger days, said, “Odisha has long been known for its hospitality, and I am sure all the visitors will take a small part of Odisha back with them. I also wish to thank the Prime Minister and the central government for all their support.”

Tirkey unveiled the trophy, marking the official opening of the 15th edition of the World Cup.

The crowds were then introduced to the 16 participating teams with loud cheers ringing out in the end for the home favourites  India, who will aim to follow the Netherlands (in 1973 & 1998) and Germany (in 2006) to become only the third nation to win the World Cup as hosts.

There was a lot more in store for the thousands of enthusiastic hockey fans in the stadium as performances by K-Pop band Black Swan, and Bollywood actors Disha Patani and Ranveer Singh thrilled all those present.

The night of song and dance opens the World Cup and sets the stage for a thrilling edition of the FIH Men’s Hockey World Cup, which will get underway on Friday (13), with the first two matches of the day being played in Bhubaneswar followed by two more matches in the evening, in the brand-new Birsa Munda International Hockey stadium in Rourkela.