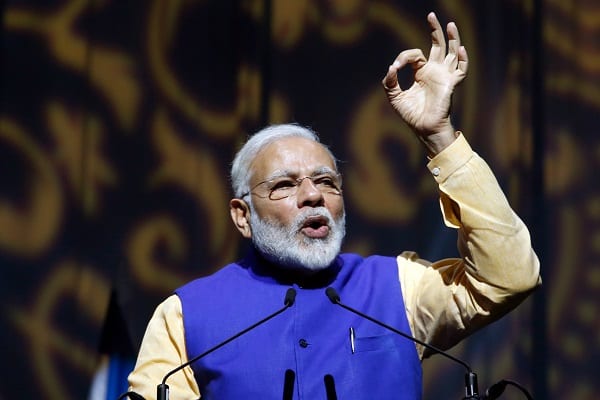 “Let me take the opportunity to propose a similar hackathon involving those ASEAN countries that may be interested in participating with the support of Singapore and India. Let the best brains in ASEAN countries compete to offer innovative solution for reducing global warming and climate change,” Modi said. (Photo: GIL COHEN-MAGEN/AFP/Getty Images).

From schools to higher education and research, an ecosystem was being created so that it becomes a medium for innovation even as the country was one among the top three startup ecosystems in the world, he said.

India was poised to become a $5 trillion economy and innovation and startups will play a crucial role in that, he added.

“We are encouraging innovation and incubation for two big reasons– one is we want easy solutions to solve India’s problems to make life easier,” Modi said after presenting awards to winners of the Singapore-India Hackathon 2019 at IIT-Madras Research Park here.
“And another (is) we in India want to find solutions for the whole of the world. Indian solutions for global applications. This is our goal and our commitment,” he said.

Lauding participants of the hackathon that was conducted over the last two days, the Prime Minister particularly singled out one of the initiatives – regarding ‘camera’ which can detect who is paying attention in a room.

“I specially like the solution about cameras to detect who is paying attention. Now what will happen you know– I will talk to my Speaker in the Parliament (Om Birla)…and I am sure it will be very useful to the Parliamentarians,” he said, evoking peels of laughter among the audience.

Noting that each one of the participants (from India and Singapore) in the hackathon was a ‘winner’, he said, “you are winners because you are not afraid of taking risks. You are committed to efforts without worrying about the results.”

Recalling that the hackathon was conducted last year in Singapore, he said this year it is being conducted in IIT Madras Research Park and the focus was “competition.”

“This time each team consists of students from both countries (Singapore and India) who have worked together to solve problems. So, it can be simply said we have moved from competition to collaboration. This strength is what we need to bear jointly on the challenges that both our countries face,” he said.

Modi said participants in the hackathon got access to state-of-the-art technology for solution to global problems.

“Participants can test their ideas, innovative skills and I firmly believe that the solutions found in today’s hackathon are the start-up ideas for tomorrow,” the Prime Minister said.
During the last five years, India has laid great emphasis in encouraging innovation and incubation, he added.

Modi said India was trying to give exposure to modern technology like machine learning, artificial intelligence, blockchain to students as early as in the sixth grade.

“From school to research in higher education – an ecosystem is being created that becomes a medium for innovation,” he said.

Holding that India would also look at cost-effective solutions, he said it would also be available to serve the needs of the poorest countries.

“India innovation (is) for the poor and most deprived no matter where they live,” he added.
“I genuinely believe that technology unites people even across countries, across continents. I welcome Minister of Education (Government of Singapore) Ong Ye Kung”, he said.

Stating that the hackathon was conducted between teams of India and Singapore, Modi mooted the idea of holding similar event with those of ASEAN countries that are interested in taking part.

“Let me take the opportunity to propose a similar hackathon involving those ASEAN countries that may be interested in participating with the support of Singapore and India. Let the best brains in ASEAN countries compete to offer innovative solution for reducing global warming and climate change,” he said.

On his visit to Chennai, Modi said the hospitality offered by the city was “extraordinary in its warmth”.

Congratulating the winners for working non-stop for the last 36 hours during the hackathon, he said, “hats off to you and your energy. I do not see fatigue (in you). I see satisfaction of a task well accomplished.”

He said the sense of satisfaction also comes from Chennai’s special breakfast. “Idly, dosa, vada, sambhar”, he said amid applause from the audience.

On the presence of people from Singapore, he said, they were in a city which offers rich culture, great heritage and food.

“I request all participants especially friends from Singapore to enjoy their stay in Chennai. Take this opportunity to visit a place like Mahabalipuram which is famous for stone carvings and stone temple. They are classified as UNESCO World Heritage site,” he said.

Interestingly, Modi is scheduled to have an informal meet with Chinese President Xi Jinping at Mamallapuram, about 50 km from here, in the second week of October.