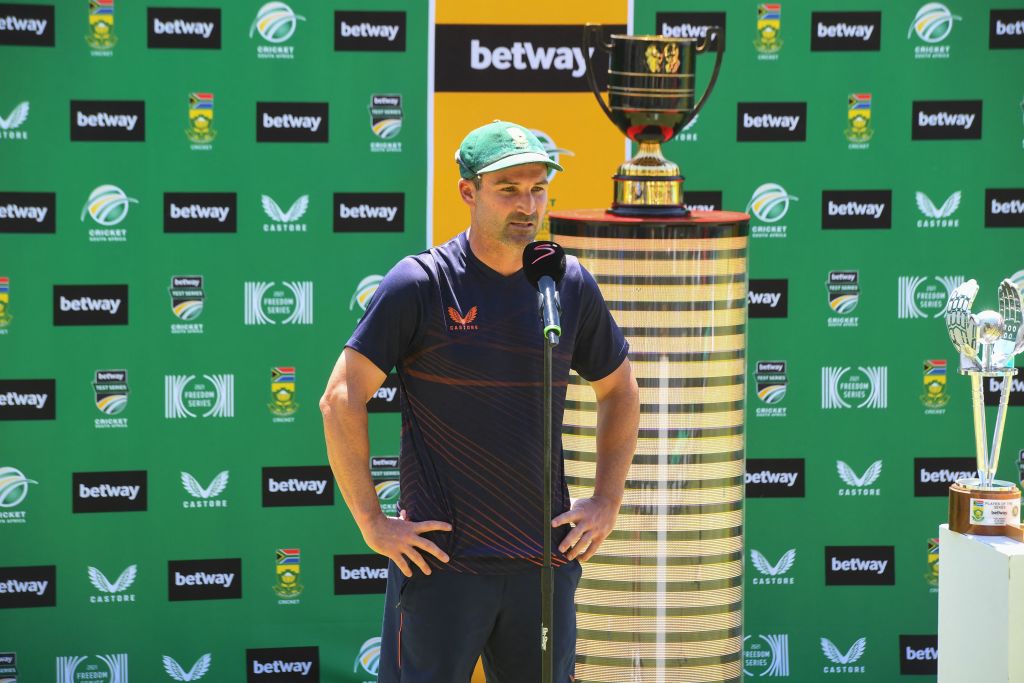 South Africa captain Dean Elgar speaks after his team crushed India in the third Test in Cape Town by seven wickets on January 14, 2022, to clinch the series 2-1. (Photo by RODGER BOSCH/AFP via Getty Images)

INDIA failed to make a comeback in the third Test against South Africa for a second time as the home team won the match in the second session of the fourth day on Friday (14) by seven wickets to clinch the series 2-1.

Needing 111 runs to win the series with eight wickets in hand, the Proteas lost only the wicket of Keegan Peterson (82) to overhaul the target of 212. They needed 41 runs post lunch and they were knocked off easily by Rassie van der Dussen (41 not out) and Temba Bavuma (32 not out). Shardul Thakur was the only successful Indian bowler on the day as he castled Peterson, who had a brilliant game with the scores of 72 and 82 and won both the player of the match and player of the series awards.

South Africa drew level in the second match in Johannesburg by winning by seven wickets.

India, who came back well into the game by taking a slender lead of 13 runs after getting bowled out for only 223 on Day 1 after captain Virat Kohli won the toss and elected to bat, failed to post a big total in the second innings as a spirited South Africa pace attack bowled them out for 198 runs on Day 4 despite Rishabh Pant slamming an unbeaten century.

With the loss, India’s goal of winning their first-ever Test series in South Africa remained unfulfilled. This was also the second time that India squandered an away series against the Proteas after losing the first match. In 2006-07, too, they lost the series 1-2 after winning the first match. Current India head coach Rahul Dravid was the captain on that occasion.

South Africa and India will now play a three-match one-day international series starting in Paarl on January 19. Rahul will lead the visitors in the absence of regular white-ball captain Rohit Sharma who has been injured while Bavuma will be in charge of the South African side.