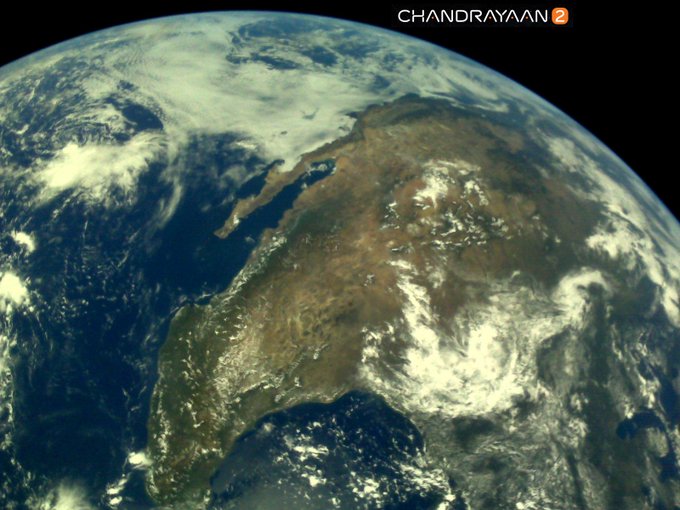 The pictures were captured by L 14 camera onboard Chandrayaan II. The pictures show the earth in different hues (Photo Credit: @isro/ Twitter).

INDIAN space agency ISRO on Sunday (4) released the first set of pictures of the earth captured by Chandrayaan 2, the country’s second Moon mission launched a fortnight ago.

The pictures were captured by L 14 camera onboard Chandrayaan II. The pictures show the earth in different hues.

“Earth as viewed by #Chandrayaan2 LI4 Camera on August 3, 2019, 17.34 UT,” the Indian Space Research Organisation (ISRO) tweeted along with the pictures.

After the launch of Chandrayaan 2, there were several pictures which were claimed to have been taken by it. However, the space agency had said the images were not taken by Chandrayaan 2.

India’s second moon mission seeking to explore the unchartered Lunar south pole by landing a rover was launched on July 22.

Chandrayaan-2 comes 11 years after ISRO’s successful first lunar mission Chandrayaan-1 which scripted history by making more than 3,400 orbits around the Moon and was operational for 312 days till August 29, 2009.

The landing of Chandrayaan-2, comprising an orbiter, lander and rover, is slated to land on the Moon, expectedly by the first week of September.

Scientists would make the soft landing of the lander in the South Pole region of the Moon where no country has gone so far.

Billed as the most complex and prestigious mission undertaken by the ISRO since its inception, Chandrayaan-2 will make India the fourth country to soft-land a rover on the lunar surface after Russia, the US, and China.