It’s confirmed! Donald Trump to run for US presidency in 2024: ‘I’m your voice’ 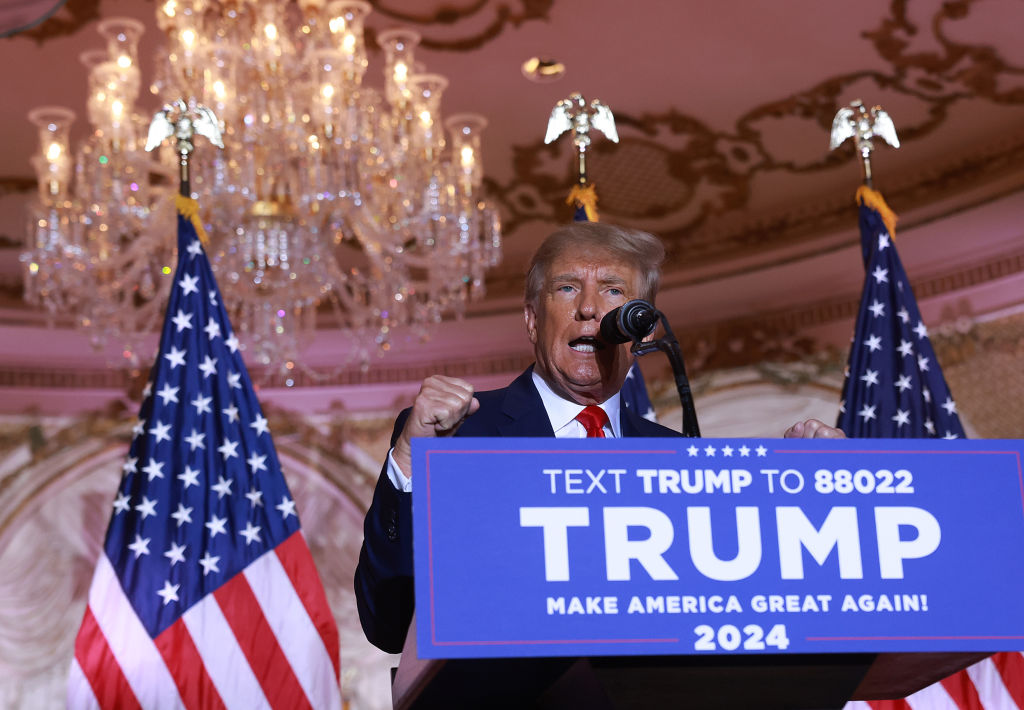 Donald Trump, who tried to overturn the outcome of the 2020 US election and deeply polarised the country, has announced that he will run for the White House in 2024, as he launched a blistering attack on president Joe Biden’s domestic and foreign policies which he claimed have made America a “failing nation.”

Trump’s long-awaited campaign is a remarkable turn for any former president, much less one who made history as the first to be impeached twice and whose term ended with his supporters violently storming the US Capitol in a deadly bid to halt the peaceful transition of power on January 6 last year.

Vowing to defeat the “radical” Democrats led by President Biden whom he described as the “face of the left-wing”, the former US president made the announcement at his Mar-a-Lago estate in Florida on Tuesday (15), a week after midterm elections in which Republicans failed to win as many seats in Congress as they had hoped for.

“In order to make America great and glorious again, I am tonight announcing that I will run for President of the United States. This will be our campaign altogether,” Trump, 76, told his cheering supporters.

“I am your voice,” he said, asserting that he will ensure that president Biden, a Democrat, is not re-elected in 2024.

Shortly before making the announcement from his resort in Florida, in front of some 400 invited guests, Trump, filed the necessary paperwork with the Federal Election Commission (FEC). “I am running because I believe the world has not yet seen the true glory of what this nation can be. We have not reached that pinnacle, believe it or not,” he said.

“America’s comeback starts right now,” he said, adding that, “We have to save our country.”

“But now we are a nation in decline. We are a failing nation. For millions of Americans, the past two years under Joe Biden have been a time of pain, hardship, anxiety and despair,” Trump said.

Surrounded by allies, advisers, and conservative influencers, Trump delivered a relatively subdued hour-long speech, rife with spurious and exaggerated claims about his four years in office.

His wife, Melania Trump, joined him on stage at the end of the speech. But there were fewer family members present than at some of his past events and daughter Ivanka Trump and Donald Jr did not attend. To evoke nostalgia for his time in office among Republicans who have shown signs of Trump fatigue following the midterms, he frequently contrasted his first-term accomplishments with the Biden administration’s policies and the current economic climate.

“This campaign will be about issues, vision and success and we will not stop, we will not quit until we’ve achieved the highest goals and made our country greater than it has ever been before. We can do this. We can do this,” Trump said. Trump also enters the race in a moment of deep political vulnerability. He has been blamed for elevating flawed candidates who spent too much time parroting his claims about election fraud, alienating key voters and ultimately leading to their defeats.

Incumbent president Biden, who turns 80 on November 20, has said that he intends to run but would take a final decision during the Christmas-New Year vacation. This is Trump’s third bid at the White House.

He won in 2016 in his maiden attempt to defeat former Secretary of State Hillary Clinton but lost to Biden in 2020.

“Are you getting ready? And I am too,” Trump told his supporters, noting that his Republican Party did not do as well as it should have, even as he emphasised that the Republican candidates supported by him had a better strike rate. The United States is going through tough times, he said.

“Together we will be taking on the most corrupt forces and entrenched interests. Our country is being destroyed before your very eyes,” he said. “Anyone who truly seeks to take on this rigged and corrupt system will be faced with a storm of fire that only a few could understand,” he said.

During his speech, Trump listed out the accomplishments of his 2016-2020 presidency and urged his countrymen to unite. “Success was greater than this country has ever had. We were leapfrogging China, leapfrogging everybody else and everybody wanted to be something,” he said.

“So, from now until election day in 2024, … I will fight like no one has ever fought before. We will defeat the radical left Democrats that are trying to destroy our country from within,” he said. Trump remains the most powerful force in his party thanks to the loyalty of his base, but he is also a deeply polarising figure. His candidacy poses profound questions about America’s democratic future. The final days of his presidency were consumed by a desperate effort to stay in power, undermining the centuries-old tradition of a peaceful transfer. And in the two years since he lost, Trump’s persistent and baseless claims about widespread election fraud have eroded confidence in the nation’s political process. Trump, in his speech, lashed out at the Biden administration.

“Joe Biden is the face of the left-wing,” he alleged.

“It can only take so much. Our victory will be built upon big Ideas, bold ambitions and daring dreams for America’s future. We need daring dreams,” he said.

“The radical left Democrats have embraced an extreme ideology of government domination and control. Our approach is the opposite one, based on freedom values, individual responsibility and just plain common sense,” Trump said.

“We will again put America First,” he said, adding that other countries must pay to come into the American market. Although he assailed the US election process, Trump did not use his speech to revive his false claims of massive voter fraud in 2020 and did not mention the violent attempt by his supporters on January 6 to prevent Congress from certifying Biden’s victory. Trump took a dig at Chinese president Xi Jinping and described him as the president for life.

“On day one, we will end Joe Biden’s war on American energy,” he promised.

The socialist disaster known as the ‘Green New Deal’, which is destroying the country, and the many crippling regulations that it has spawned will be immediately terminated so that the United States can again breathe, grow and thrive as it should, he said. Trump also boasted about his tariffs on China, claiming, “no president had ever sought or received one dollar for our country from China until I came along.”

Trump will seek his party’s nomination even as he faces trouble on several fronts, including a criminal investigation into his handling of government documents, a congressional subpoena related to his role in the January 6 assault. Trump has called the investigations politically motivated and has denied wrongdoing.

As president, Trump faced criticism over several of his actions, especially his management of the worst public health crisis in nearly a century – the Covid-19 pandemic – though his administration helped facilitate the development of vaccines to treat the novel coronavirus in record time, CNN reported.

He also was slammed by critics over his handling of Hurricane Maria, which devastated Puerto Rico in 2017; the White nationalist rally in 2017 and Black Lives Matter protests.

As president, Trump was an impulsive leader, who dispensed with long-standing norms, often announcing policy and Cabinet personnel changes on Twitter. He was ultimately banned from the platform following the US Capitol riot and was later barred from Facebook, Instagram, and YouTube as well.

He pushed an “America First” foreign policy approach, pulling the US out of international agreements such as the Paris climate accord and the Iran nuclear deal, a pair of controversial moves that were decried by many of America’s top European allies.