Meet Achinta Sheuli, the weightlifter who won India’s 3rd gold at CWG 2022: ‘Hope he gets to watch a film now’ 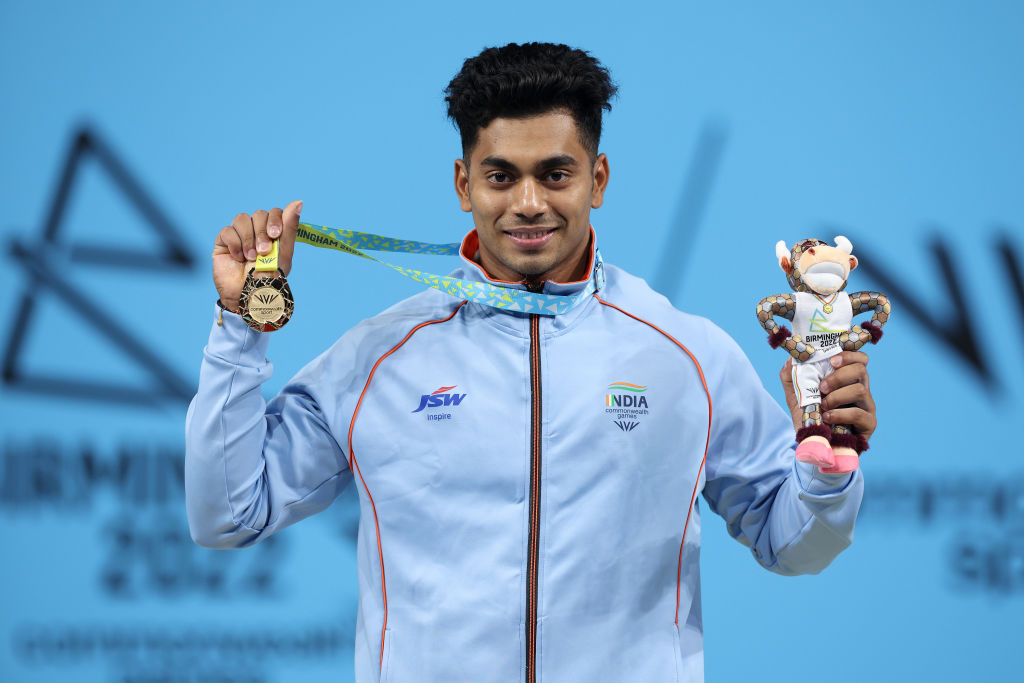 BIRMINGHAM, ENGLAND – JULY 31: Gold medalist Achinta Sheuli of Team India pose on the podium during the Men’s Weightlifting 73kg medal ceremony on day three of the Birmingham 2022 Commonwealth Games at NEC Arena on July 31, 2022 on the Birmingham, England. (Photo by Eddie Keogh/Getty Images)

INDIAN weightlifters continued to shine at the ongoing Commonwealth Games 2022 in Birmingham, UK, with Achinta Sheuli becoming the third from the South Asian nation to win the gold with a combined lift of 313 kilograms (kg) in the men’s 73 kg final on Sunday (31).

It was the second top medal for India as Jeremy Lalrinnunga won the same in the men’s 67 kg final earlier in the day.

India were at No.6 in the medal tally with three golds, two silvers and one bronze. Australia were leading the teams with 22 golds, 13 silvers and 17 bronzes.

The first gold for India came from Olympic medallist Mirabai Chanu who won it in the 49 kg final in the women’s category on Saturday (30).

Sheuli, 20, made a great start to his medal campaign in the snatch category by lifting 137 kg. He then lifted 140 kg in the second attempt and 143 kg in the third and final attempt. It was three out of three for Sheuli who created a new record in the Commonwealth Games.

In the clean and jerk lift category, too, Sheuli came up with a commendable display of power as he lifted 166 kg in his first attempt. In the second attempt, he decided to lift 170 kg but failed while in the third and final attempt, he lifted the same quantity with ease.

Hope he now gets time to watch a movie: PM Modi

Indian prime minister Narendra Modi, who was elated over Sheuli’s achievement, shared a video of him interacting with the Indian contingent for the Commonwealth Games 2022. In the video, Modi was seen asking Sheuli about his composure and focus and how the young sportsperson liked to see films but could not see them because of a busy schedule.

Recalling that conversation after Sheuli won the gold, Modi said the weightlifter could now see films as he would have ample time to entertain himself.

“Before our contingent left for the Commonwealth Games, I had interacted with Achinta Sheuli. We had discussed the support he received from his mother and brother. I also hope he gets time to watch a film now that a medal has been won,” Modi tweeted.

Before our contingent left for the Commonwealth Games, I had interacted with Achinta Sheuli. We had discussed the support he received from his mother and brother. I also hope he gets time to watch a film now that a medal has been won. pic.twitter.com/4g6BPrSvON

Who is Achinta Sheuli?

Born in Panchla in Howrah district of the eastern Indian state of West Bengal in November 2001, Sheuli is from a humble family background. His father was a manual labourer who died in April 2013. Sheuli, who studied in a government school in Bengal, finished third in Youth National Games in Haryana and finished third. His elder brother Alok played a big role in shaping his sporting career. After winning the gold at the Commonwealth Games, Sheuli told Asian News International, “I am very happy. After overcoming many struggles, I won this medal. I will dedicate this medal to my brother and coaches. Next, I will prepare for Olympics.”

He won the junior national-level weightlifting tournaments in 2013 in the 50 kg category and got an opportunity to enter the Army Sports Institute in Pune in the western state of Maharashtra in 2014.