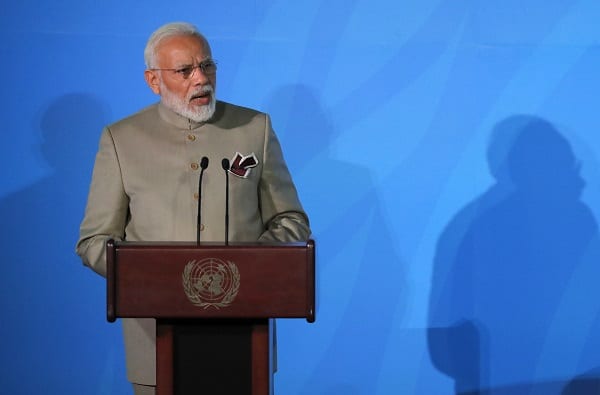 Briefing reporters about Modi’s engagements, Ministry of External Affairs Spokesperson Raveesh Kumar said in a couple of meetings, the situation in the Jammu and Kashmir region did come up (REUTERS/Lucas Jackson).

Briefing reporters about Modi’s engagements, Ministry of External Affairs Spokesperson Raveesh Kumar said in a couple of meetings, the situation in the Jammu and Kashmir region did come up.

“You are aware that on the situation in Jammu and Kashmir, we have engaged with several countries at different levels. But, you know, given the nature of the meeting on the sidelines, the focus was on bilateral issues mainly,” Kumar said.

India has always maintained that Jammu and Kashmir is its integral part and ruled out any third party mediation, including either from the UN or the US, saying it is a bilateral issue with Pakistan.

The Secretary-General has also repeatedly asserted that his good offices are available only if both sides ask for it.

Emir of Qatar expressed his gratitude to the Indian diaspora for the role in supporting the economy of the country.

The two sides also discussed cooperation in counterterrorism against the backdrop of the situation in the region, Kumar said.

India has granted assistance of $35 million for the construction of the Mahatma Gandhi International Convention Center in Niger and the project is nearing completion, Kumar said.

Niger president Mahamadou also raised the issue of cooperation in the agriculture sector and solar energy.

He said that India has a lot of experience in these two areas and the two sides also discussed on taking this forward.

Kumar said it was suggested that a task force could be formed in this area, adding that counter-terrorism cooperation was discussed.

A need was felt to coordinate and energise the position between the two countries as we face the common threat of terrorism,” he said.

With Italy, the focus of discussion was defence, economic cooperation and how the two sides can expand and further the bilateral investment.

Modi also met with Henrietta Fore, the Executive Director of UNICEF, and underlined the efforts made by his government towards the health and nutrition of the children of India.

“Ms. Henrietta Fore @unicefchief called on [email protected] on the margins of #UNGA. PM underlined the efforts made by the Government towards health and nutrition of children in India through several focused initiatives,” the MEA spokesperson wrote on Twitter.

The meeting with Namibia focussed on bilateral cooperation and the Namibian leader Geingob thanked Modi for the assistance which India provided during the drought in that country.

During the meeting with Maldives president Solih, there was discussion on cooperation in cricket, climate change.

“There is a proposal for training the Maldivian cricketers in India and that training actually is going to start next month in October,” Kumar said, adding that some discussion also took place about a cricket stadium which is supposed to come up in Maldives.

“Using every opportunity to touch base with our neighbour PM @narendramodi had a good discussion with Maldivian president @ibusolih on the margins of #UNGA. Both leaders discussed progress on development partnership, and cooperation in climate change,” Kumar said in another tweet.

He also had a meeting with the US Special Envoy on Afghanistan Zalmay Khalilzad.

“Met Ambassador Zalmay Khalilzad @US4AfghanPeace for an exchange of views on the latest situation in Afghanistan,” Jaishankar tweeted.