Who is Saif al-Adel, the ‘Black Hawk Down’ man likely to succeed al-Zawahiri as next Al Qaeda chief 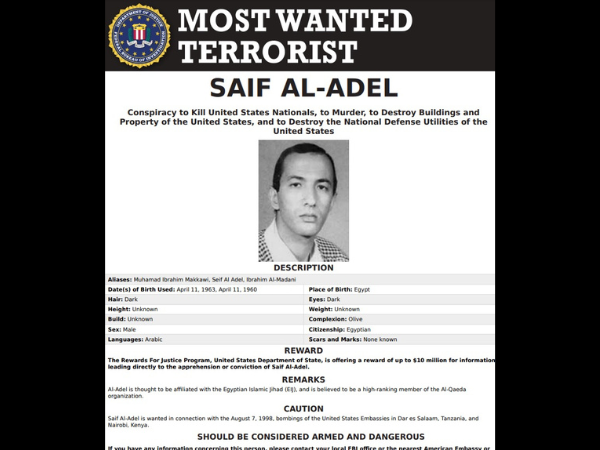 THE elimination of Ayman al-Zawahiri in a targeted drone strike by the US forces in Kabul, Afghanistan, in late July has left terror group Al Qaeda without a top leader yet again. Al-Zawahiri had succeeded Osama bin Laden as the outfit’s chief after the latter was killed in a special operation by American forces in Pakistan in May 2011, almost a decade after the 9/11 terror attacks on American soil.

Now with the killing of al-Zawahiri, the name of veteran member of the group, Saif al-Adel, has come to the fore as Al Qaeda’s next leader, reported the Middle East Institute, a non-profit think-tank based in Washington DC, the US.

The question over al-Zawahiri’s succession is not the same as it was with bin Laden. In 2011, when he was killed by the US forces, al-Zawahiri was the obvious choice as his successor since he was considered to be the brains behind Al Qaeda’s terror operations, including 9/11.

This time, there are a few names doing the rounds to become the outfit’s next chief and al-Adel is one of the foremost among them.

Who is Saif al-Adel?

Saif al-Adel, whose original name is believed to be Mohammed Salah al-Din Zaidan, was born in the early 1960s in the Monufiya governorate of Egypt. He is among the most experienced military professionals in the global network of terrorism. Saif al-Adel means ‘Sword of Justice’.

Al-Adel joined the Egyptian military in around 1976 and went on to become a colonel i the Special Forces as an explosives expert. He might have received training in the erstwhile Soviet Union at a time when Egypt still had good ties with that country. He reportedly was affiliated with the Egyptian Islamic Jihad, an Islamist organisation which is co-founded by the late al-Zawahiri.

It was learnt that al-Adel fled Egypt in the late 1980s and went to Afghanistan and joined an outfit called Maktab al-Khidamat, a small but well-funded body which was forerunner to today’s Al Qaeda. It was founded in 1984 by bin Laden and al-Zawahiri and others to fund, recruit and train Mujahideen soldiers backed by the US to fight the Soviets.

In the early 1990s, al-Adel reportedly lived in Peshawar in Pakistan. Later, he left for Somalia in Africa where he trained militants and helped in expanding Al-Qaeda’s network.

Still later, al-Adel fought American forces in Somalia with Russian arms and led a successful attack on Washington’s troops in 1993 (the ‘Black Hawk Down’ incident) in which 19 US soldiers were killed, according to a paper penned by Ali Soufan for the Combating Terrorism Centre, an academic body at the US Military Academy in New York, the US.

Al-Adel reportedly joined bin Laden during his mission in Sudan in the mid 1990s where they were attacked by the conservative Islamic government of Omar al-Bashir.

Al-Adel later went to Yemen, around the same time when al-Qaeda left Somalia, eyeing a Yemeni offshoot of the terror outfit. After bin Laden was expelled from the African country, al-Adel went to Afghanistan with him in 1996, the year the Taliban took control of the South Asian nation.

The US government put a bounty worth $5 million on al-Adel’s head and later it was raised to $10 million for his involvement in teh bombings of the US embassies in Tanzania and Kenya in 1998.

Ahead of the 9/11 terror attacks, al-Adel was appointed as the chief of defence of the Afghan city of Kandahar. He reportedly was not agreement over the 9/11 plan, just like his Taliban counterpart Mullah Muhammad Omar.

Al-Adel features on the ‘Most Wanted Terrorists’ list of the Federal Bureau of Investigation since 2001. He has been based in Iran since early 2000s and also had a stint in Pakistan a decade ago.