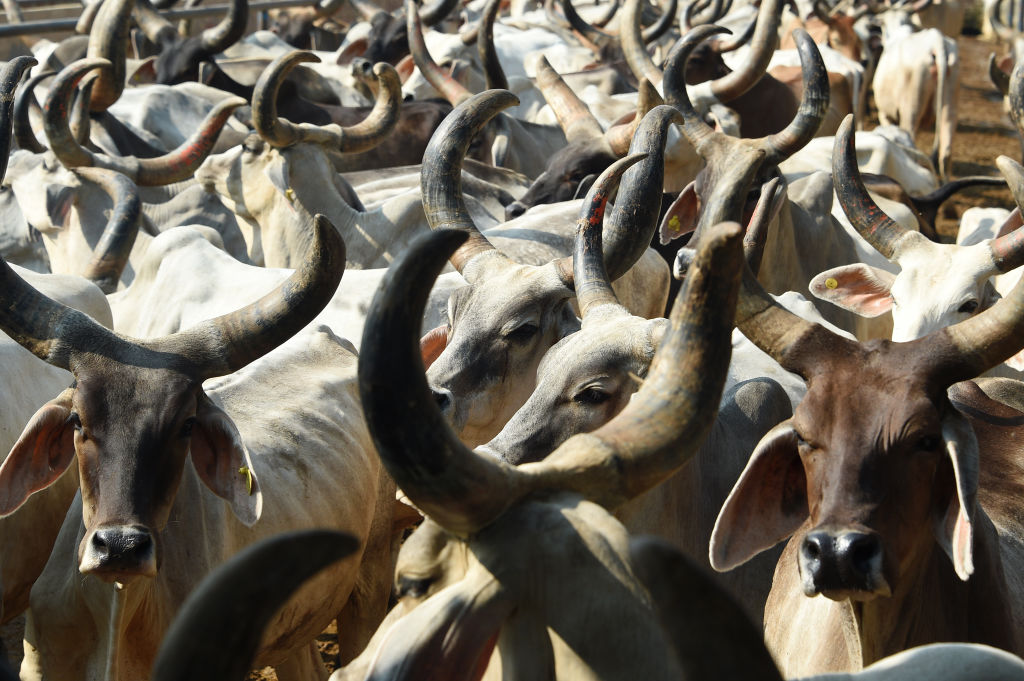 A cow shelter in India. (Photo by DOMINIQUE FAGET/AFP via Getty Images)

COW vigilantism has turned out to be a burning issue in India’s socio-political life in which Hindu right-wing outfits have been mercilessly attacking those who have dared to ‘insult’ the animal considered sacred by the country’s majority community.

But there is also a story on the other side and people are also complaining about it. It is attacks by stray cows that have proved to be fatal on many occasions, even for those belonging to the Hindu religion.

Ram Raj, for instance, is one among the poor victims of cow attack in Uttar Pradesh, India’s most populous state which is due to go to polls starting next month.

According to a report from the BBC, he was having tea at his home in the state on a chilly evening last November when a stray cow targeted him. The man had little chance of escaping and was mauled by the horned animal in front of his traumatised grandchildren who screamed while witnessing the horror. The 55-year-old Ram succumbed to his severe injuries on the way to hospital.

“It was a painful death and my mother-in-law has stopped having proper meals ever since,” Anita Kumari, the victim’s daughter-in-law, told the news outlet.
Ram is not the only person to have faced such attacks as they have become common in Uttar Pradesh which is ruled by prime minister Narendra Modi’s Hindu nationalist Bharatiya Janata Party and is being projected as a state which is making great progress towards emerging as a model state.

Since a ban has been imposed on slaughtering cows, a huge surge in the cattle population in the state has seen the problem multiplying alarmingly. The attacks have even become a big issue in Uttar Pradesh’s upcoming elections.

Until recently, a number of farmers used to take their old cattle to the slaughterhouse.

“We used to sell our cows once they stopped giving milk or were no longer fit for ploughing fields. That was our back-up plan for hard times,” Shiv Pujan, a paddy farmer, told BBC.

But after the BJP came to power in the state in 2017, cow slaughtering was stopped to promote the right-wing Hindu agenda. The practice has now become illegal in as many as 18 states in India, including Uttar Pradesh.

Yogi Adityanath, a hardline Hindu leader, shut down several allegedly illegal slaughterhouses after coming to power despite the fact that they were part of a major business in the state – exporting buffalo meat.

There have been several instances of cattle traders – from the minority or even Dalit (who are at the bottom of the Hindu caste hierarchy) community – being attacked and killed by cow vigilantes often linked to the BJP or right-wing groups.

In September 2015, an elderly Muslim man was lynched in Dadri in Uttar Pradesh on charges of slaughtering a cow.

Repeated instances of attacks by cow vigilantes have forced many of the cattle traders to give up the business. They have stopped buying cattle and the farmers have been left with no other choice but to abandon old cows that have lost productivity.

“Now there aren’t any buyers so obviously, no-one can sell them,” Pujan said, adding that he and others are forced to leave old cattle in nearby forests.
The abandoned cattle are roaming the towns and villages in Uttar Pradesh and as they turn hungry, they become aggressive. The animal that fatally attacked Ram Raj was one of them.

Pujan himself was also attacked by a herd of stray cattle recently when he tried to chase them away from his paddy field.

“Two of them tried to push me down to the ground and I ran for my life,” he said, showing his hand, which was cut while he tried to cross a barbed wire fence, in bandage.

Pujan is also a devoted Hindu who believes that the cow is sacred but at the same time, he is also angry with the state government’s blanket order that all cows should be protected.

Other famers like him say the stray cows also ruin crops, cause road accidents besides killing people.

“My son is an orphan now because of the stray cows roaming around. Who will look after us?” Poonam Dube, whose husband was killed by a stray bull, asked.

Bhupendra Dubey, 36, had come back to his village after losing livelihood during the first wave of the coronavirus pandemic in 2020. When he went to the local market to buy sweets for his son, he was attacked by the bull and it was fatal.

At another place in the state, a 80-year-old woman named Ram Kali went into coma in 2019 after she was injured by a cow and is yet to know that her son died of Covid last year, the BBC report added.

The opposition parties in the state have taken up the issue ahead of the state polls. Since farmers are a crucial voting bloc in the state, they are not sparing any effort to capitalise on the same to target the Adityanath government.

The government said that it was “devising new strategies” to deal with the problem.

Sameer Singh, the state government’s spokesperson, told BBC, “These should not be called stray cows as the animal itself is part of the Hindu culture. We never leave our elders to die when they grow old, how can we leave our cows to die on the roads?”

The stray cows are meant to be accommodated in shelters for which the state government has allocated millions. It has also started a special alcohol tax to maintain thousands of state-run cow shelters.

But yet the issue is far from being resolved.

BBC Hindi visited a government-run shelter in Ayodhya district of the state and there it was cows jostling for space.

“There are 200 cows here, which is our maximum capacity. Some 700-1,000 stray cows are still roaming around the area,” Shatrughan Tiwari, who looks after the shelter, said.

Meanwhile, several famers are guarding their farms round the clock from the animals. They take turns and brave cold weather and snakes to patrol the paddy fields in the night.

“We have groups of people from across the village who keep taking turns. A new team will arrive in the morning to replace us, and then we will go home and rest,” Bimla Kumari, a 64-year-old farmer, said.

But many others too are upset with the challenge and are even considering boycotting the upcoming seven-phase election as a protest against the government.

“What is the point in voting if our problems aren’t solved by it?” one of them told BBC.