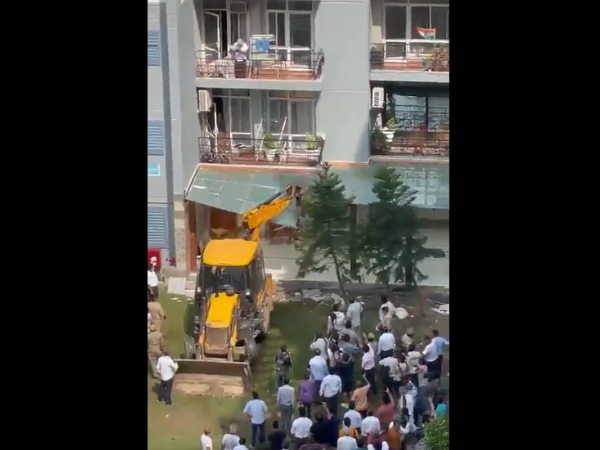 A bulldozer demolishes the encroachment by Shrikant Tyagi in a housing society in Noida, Uttar Pradesh, on Monday, August 8, 2022. (Picture: Twitter handle of @Benarasiyaa)

Authorities in the northern Indian state of Uttar Pradesh on Monday (8) demolished an encroachment at a housing society in Noida area by Shrikant Tyagi, a self-proclaimed member of the ruling Bharatiya Janata Party (BJP) who recently made the headlines for allegedly abusing and assaulting a woman.

On Monday, bulldozers, accompanied by teams of Noida Police arrived at the Grand Omaxe housing society in Noida’s Sector 93 where Tyagi was accused of manhandling and abusing a woman resident after she reportedly confronted him over an alleged encroachment. The video of the incident went viral on social media.

TW: Abuse, Physical abuse.
The man in the video (black suit) who is seen to be hurling slurs and even pushing the women is Shrikant Tyagi , a National executive member of @BJP4India . #Noida #Omaxe pic.twitter.com/wVYyWVRLMQ

Residents of the society were seen clapping and cheering as a bulldozer razed the construction by Tyagi.

“We are happy with this action by chief minister Yogi Adityanath and CEO of Noida Authority. We were annoyed with his [Tyagi’s] illegal construction and attitude,” a resident was quoted as saying by India Today.

#WATCH | Uttar Pradesh: Noida administration demolishes the illegal construction at the residence of #ShrikantTyagi, at Grand Omaxe in Noida's Sector 93.

Tyagi, in a viral video, was seen abusing and assaulting a woman here in the residential society. pic.twitter.com/YirMljembh

Brajesh Pathak, deputy chief minister of the state, said, “CM has taken cognisance of the whole case, we will not let the accused walk free. Strict action will be taken against those who break the law.”

Tyagi, who has been absconding since the charges came up, was booked under Section 354 of the Indian Penal Code (assault or use of criminal force on any woman, intending to outrage or knowing it to be likely that he will thereby outrage her modesty).

The Noida Police also charged him under the Gangster Act under which his properties can be attached and demolished.

Ranveer Singh, additional deputy commissioner of police, law and order, told the Press Trust of India that police teams were raiding all possible whereabouts of Tyagi and leaving no stone unturned to arrest him.

The ruling BJP distanced itself from Tyagi saying he is not a member of the party.

Police sources said Tyagi went to the neighbouring state of Uttarakhand from Noida but police could not catch him as he had fled that state too. The man’s latest location was found between Haridwar and Rishikesh in Uttarakhand. While he had left his original mobile phone at home, he was carrying two other phones through which he was in contact with his lawyers and associates.

The case involving Tyagi goes back to 2019 when the Grand Omaxe society’s owners’ body wrote to the Noida Authority for removing the encroachment by Tyagi. He was served with a notice in February 2020. He allegedly refused and tried to use his influence till last week when his confrontation with a protesting woman went viral on social media and the controversy snowballed.