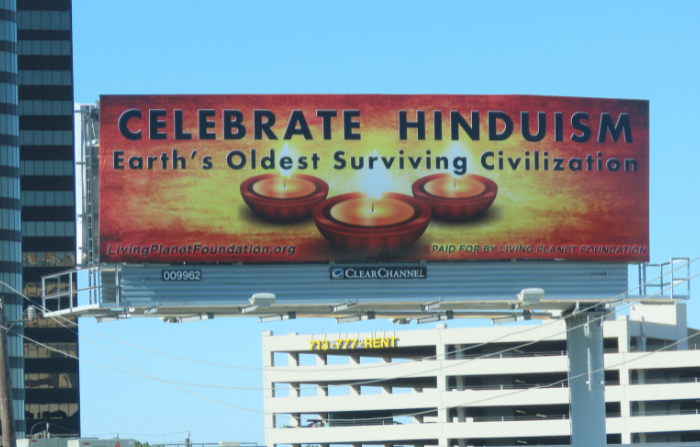 One of the billboards in Houston in Texas, the US, promoting Hinduism and Diwali celebrations. (Picture: Dr Kusum Vyas)

ON October 11, people of Houston were surprised by a scene they saw in the city. A massive billboard championing Hinduism popped up in the Greater Houston area around the time of Diwali, the Hindu festival of light, to spread the message of brotherhood and harmony. A second billboard came up after a fortnight glorifying the festival of Diwali.

The hoardings, with their peaks at 300 foot (91 metre), are believed to be the first of its kind in the US’s fourth-most populous city and is the brainchild of two American-Hindu women – Dr Kusum Vyas, founder of Living Planet Foundation, Houston, and Dr Veena Ambardar, a retired engineering specialist/scientist at the city’s NASA Johnson Space Center.

Both Dr Vyas and Dr Ambardar were aware of the fact that sentiments over ‘Hindu Heritage Month’ was reverberating across America in October and they wanted to do something unique to capture the spirit of the moment and spread the appeal of Hinduism, one of the oldest religions on the planet. The hoardings, which also feature the ‘Om’ symbol, were the consequences.

“Om is perpetually green till eternity and stands tall, way after the Hindu Heritage Month is over in October,” Dr Ambardar said. “Om can produce powerful and positive vibrations which allows you to feel the whole universe and reverberates in the universe till the end of time. It is way above any recognition given by America or the world to Hinduism- it goes far above the atmospheric levels of Earth into the far orbit of the universe,” she added.

“From the onset, we were firm in our conviction that the billboards were not about any individuals or organization. This life is not about us. It is not even about other people. There is a higher calling. A higher focus,” Dr Vyas said, adding, “For us, the focus was to share positive vibes and energy of sanatan dharma – the foundation of Hinduism, with the world around us.”

“We are passionate about Hinduism and believe, when projected properly, Hinduism with its eternal message of Vasudhaiva Kutumbakam – the world is a family – can unite humanity, prevent wars and alleviate suffering in the world,” Dr Ambardar said. “The project was made possible by donations from supporters and personal funds. We are very thankful to all those who supported us as none of our efforts would be possible without their help,” she added.

The duo executed their idea fast since the billboards had to be installed before October ended and Diwali arrived. They did it efficiently and set up the billboards at premium locations of the city that offered maximum visibility.

Clear Channel got the deal

A number of billboard companies were interviewed for the process and finally, Clear Channel, a leading one, got the job. The duo selected a prime spot for erecting the billboards with over 850,000 weekly impressions. It was on I-45, known to the residents of Houston as the Gulf Freeway. It connects downtown Houston, NASA and Galveston over the Galveston Causeway to the Gulf of Mexico.

Dr Ambardar, who is known to be a skilled negotiator, finalised the contract. During the negotiations, Clear Channel offered to install a second billboard at a rate the two women could not refuse. Thereafter, the search for a second location began and another plum spot at I-69 Southwest Freeway was identified. With over 800,000 impressions, it was quickly confirmed for the second billboard which was installed on October 27.

Though the initial design concept of ‘Om’ was created for the I-45 location by Dr Vyas, the words ‘Celebrate Hinduism’ and ‘Pure Unconditional Love for All Living Creatures’ – a quotation from the Rig Veda – were added. The creative hands at Clear Channel gave the idea a suitable shape which made the billboards the talking points of the town in no time.

“Our main aim was to create a billboard that was forward-thinking and engaging, we designed a billboard that is visually interconnected to the ethos of Hinduism and close proximity of Houston, also known as Space City, to NASA and Space Exploration, we wanted to rise to the level of ‘Om’ so that it reverberates with the concept of space and the universe,” Dr Vyas said.

“Our design focuses on making the billboard feel warm and emanate the true essence of the sacred ‘Om’ by maximising daylight, augmented with an atypical use of appropriate colours, bringing warmth and peaceful vibrations to everyone’s experience, from drivers on the freeway to passengers in private vehicles,” she added.

“It is a turning point in the ethnic cultural history of America where a tiny segment of society’s 4-6 million Hindus/Indian-Americans are bringing via their culture and religion of peace, unity and equality: Hinduism to America within ways never before seen on US soil,” Dr Ambardar said.

For the second billboard that came up just ahead of Diwali, Dr Vyas decided to bring into play a concept of illumination, keeping in mind the relevance of the festival of light. The structured featured multiple ‘diyas’ or earthen lamps that are lit on the occasion of Diwali and was adorned with the words ‘Earth’s Oldest Surviving Civilization’ besides the regular ‘Celebrate Hinduism’.

“Extensive research of Hinduism clearly proves that the most important characteristics of a civilization are interwoven deeply into the fabric of Hinduism,” Dr Vyas added.

“Hindu civilization is layered and imbibed with many core values such as oldest known religion (sanatan dharma), literature, yoga, astrology, numerology, science, mathematics, highly organized cities, atheism and several more attributes, too many to list here. This rich tapestry of values is a framework to why Hinduism is defined as a civilization.”

Dr Ambardar did not forget to give Clear Channel its due. “Clear Channel’s name will be etched in the history of Houston and America as being the first media company which promoted Hinduism in Houston, and thereby becoming the first billboard company in America to do so,” she said.

“It was such a surreal, patriotic and exhilarating experience to finally see a billboard standing tall at 300 foot above the ground announcing to the entire world the importance of Hinduism and beckoning the general public to enlighten their souls and absorb the magic of illuminated lamps signifying Diwali which is the celebration of victory of light over darkness, knowledge over ignorance, and good over evil,” she added.

Dr Vyas said they have received an overwhelming response over the billboards and callers have also been seeking to know how they could be replicated in their cities.

“Billboards celebrating Hinduism are apparently an unheard-of phenomenon. That begs the question. Are these the first-ever Hinduism billboards in North America?” she asked.