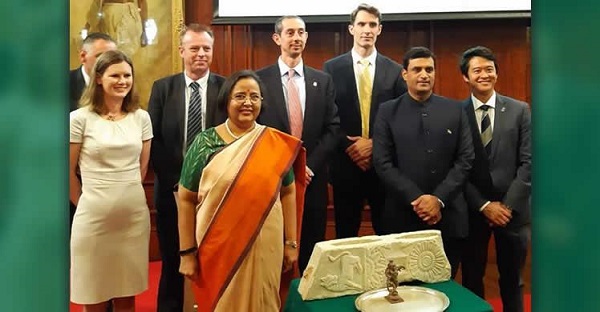 The Indian high commissioner in the UK Ruchi Ghanshyam received the two artefacts – a limestone carved relief made during the period between 1st century BC and 1st century AD, and a 17th century bronze figure of Navneetha Krishna (Photo: www.ice.gov).

TWO rare artefacts with origins in Southern Indian states of Andhra Pradesh and Tamil Nadu handed over to the Indian commissioner in London on the occasion of India’s 73rd Independence Day on Thursday (15).

The two rare items were stolen from India. They were found after a joint probe by the American and British authorities.

The Indian high commissioner in the UK Ruchi Ghanshyam received the two artefacts – a limestone carved relief made during the period between 1st  century BC and 1st century AD, and a 17th-century bronze figure of Navneetha Krishna.

The artefacts were recovered with help of officials of the Scotland Yard.

Ghanshyam thanked the officials of the Homeland Security Investigation (HSI) and the Manhattan District Attorney’s Office for recovering and returning the antiquities to India.

She hoped that more than 2000 antiquities would be returned to India when the legal proceedings against those involved conclude.

The artefacts are linked to one of the most prolific art smugglers in the world, who was recently charged in Manhattan, New York.

An individual in the UK who possessed the items came forward to HSI expressing a desire to surrender the pieces.

In June 2019, working with the MPS, the individual cooperated and turned over the artefacts to authorities.

With the assistance of Indian Customs and an expert examination, the limestone relief is estimated to date from 1st century BC to 1st  century AD, originating from Andhra Pradesh.

The bronze figure is estimated to date from 17th century AD, originating from Tamil Nadu.

Both items will be physically examined by domain experts at a later date to establish their exact period and original location.

The repatriated artefacts are just two of more than 2,600 antiquities that have been recovered around the world.  The investigation remains ongoing.

Peter C. Fitzhugh, special agent in charge for HSI New York said: “The cultural significance of artefacts looted from regions around the world extends beyond a monetary value. The pieces, like those recovered through this operation, are stolen fragments of history; and it is an honour to return them to their rightful home country.”

“HSI recognizes the importance of both international and local partnerships in locating pilfered antiquities and cultural property, and it is through these repatriations that new generations are able to experience a part of their nation’s story.”

The handover event was part of Independence Day celebrations in India House in the British capital city.

The programme in India House was preceded by a significant event in Bedford, where the India flag was hoisted in the Town Hall, home of the local council.