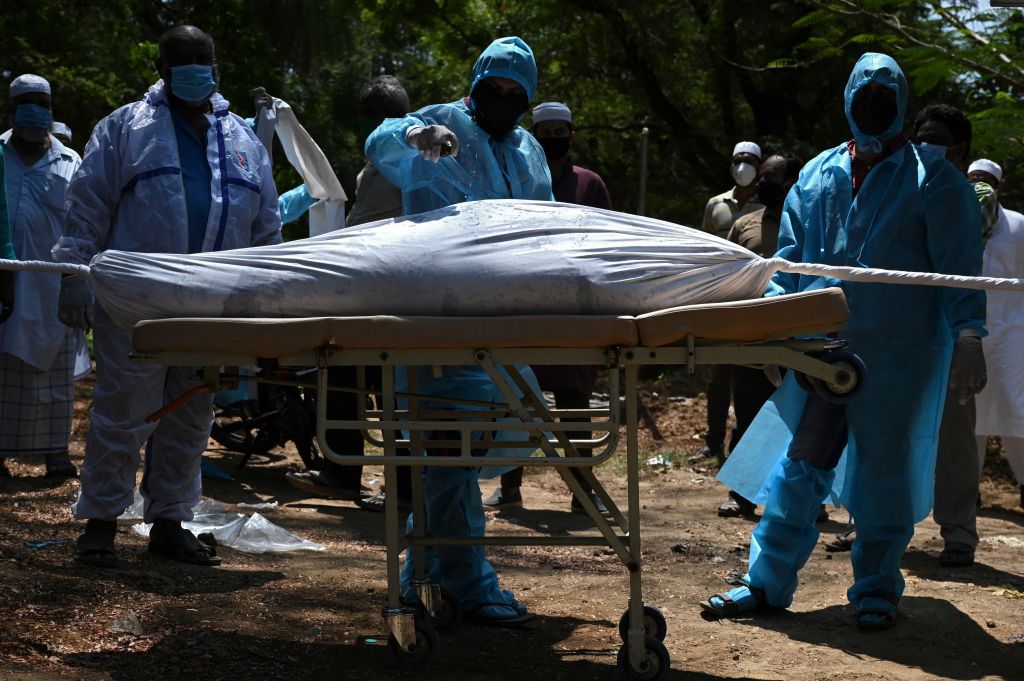 A body of a Covid-19 coronavirus victim in Chennai in the Indian state of Tamil Nadu. (Photo by ARUN SANKAR/AFP via Getty Images)

Malti Gangwar, her daughter, told the news outlet that following her mother’s death, the family received many calls from officials of the health department condoling the death. Even Shanti Devi’s colleagues urged Malti to apply for the same job that her mother did. She did the same but has not got any response from the government on that even after four months.

“There was talk about insurance money and they all seemed very co-operative. They asked me to fill in a form to apply for the job, which I did. But I don’t know what happened after that,” she told BBC. Neither the compensation nor the job has materialised yet.

In March last year, the Narendra Modi government promised £50,000 to the family of every health worker who lost life in fighting Covid. But according to a BBC investigation, which is partly based on Right to Information requests, lack of data, red-tapism and a discriminatory policy left many of the families requiring assistance in trauma.

The news outlet spoke to several families who were not happy with the government’s response despite the promise. Not many people even agreed to give an interview since many feared that speaking on the matter could see them getting denied compensation.

In July, when the government was asked in the parliament about the number of health workers who died of Covid, the junior health minister said they did not maintain occupation-based data on cases and deaths.

The Indian Medical Association told the BBC that coronavirus killed almost 1,600 doctors and the Trained Nurses’ Association of India said 128 died. The government said more than 100 women community health workers (Asha workers) died while carrying out their Covid-related duties and this was before the deadly second wave rocked the country. All that sum up to at least 1,800 deaths among the health workers but no number is available as to how many ward boys, assistants and other contract workers in hospitals died in Covid, the BBC report added.

The revelation was stunning for many since Indian prime minister Narendra Modi personally cheered healthcare workers and their families when the pandemic started. He even urged ordinary citizens to clap, light lamps to express gratitude for the health workers. The Indian Air Force showered flower petals from helicopters on hospitals in various Indian cities. India’s finance minister Nirmala Sitharaman called doctors, nurses and health workers “Gods in white uniform” while announcing compensation packages.

Families of people like Shanti Devi have been deeply hurt after getting no compensation or job. They told the BBC that despite reaching out to the administration, they did not hear back. India’s ‘Asha’ workers are at the bottom of the country’s healthcare system, at the village or neighbourhood level, and are important for any public health programme.

Shanti Devi, who was in her early 50s at the time of her death, did the job for almost 25 years but got little in terms of remuneration. The exposure to Covid increased the risk even more.

BBC further reported that the Indian government said it had received 1,342 compensation claims between March 30, 2020, and July 16, 2021, and have settled 921 claims so far. The rest were either under processing or have been rejected.

The rejected claims included that from Sujata Bhave, the 56-year-old widow of a doctor husband who passed away in June 2020 after contracting the virus. Dr Chittaranjan Bhave was a private ENT (ear, nose, throat) specialist in Mumbai in the western state of Maharashtra. According to his wife, he was initially seeing patients online but never felt satisfied with the diagnosis since it was difficult to examine ear, nose and throat via video calls.

He started examining the patients in person soon and contracted the virus soon. He was admitted to hospital and died there. She then claimed compensation but it was denied because “her husband had not been working in a government-designated Covid ward when he got infected”.

She was devastated. She called it “humiliating” and “unfair”.

“It is definitely not the case that only public doctors faced the virus and private practitioners did not. This was unfair,” she said.

The Indian government’s policy, which insists on compensating only government doctors, has come under criticism, even from the medical community, particularly because the government hospitals could not handle the burden alone.

“It should be expanded. The people who ought to be given absolutely high priority are our health workers. The government ought to be much more large-hearted, and whether they are private sector or public sector, I really wouldn’t make that distinction at this point,” she said.

Last November, a parliamentary report noted a large number of vacancies in public hospitals and recommended “adequate remuneration and financial incentives along with insurance coverage” for all healthcare workers.

“The doctors, who have laid down their lives in the fight against the pandemic must be acknowledged as martyrs and their families be adequately compensated,” it added.
But for the families of several health workers, the reality has been different.