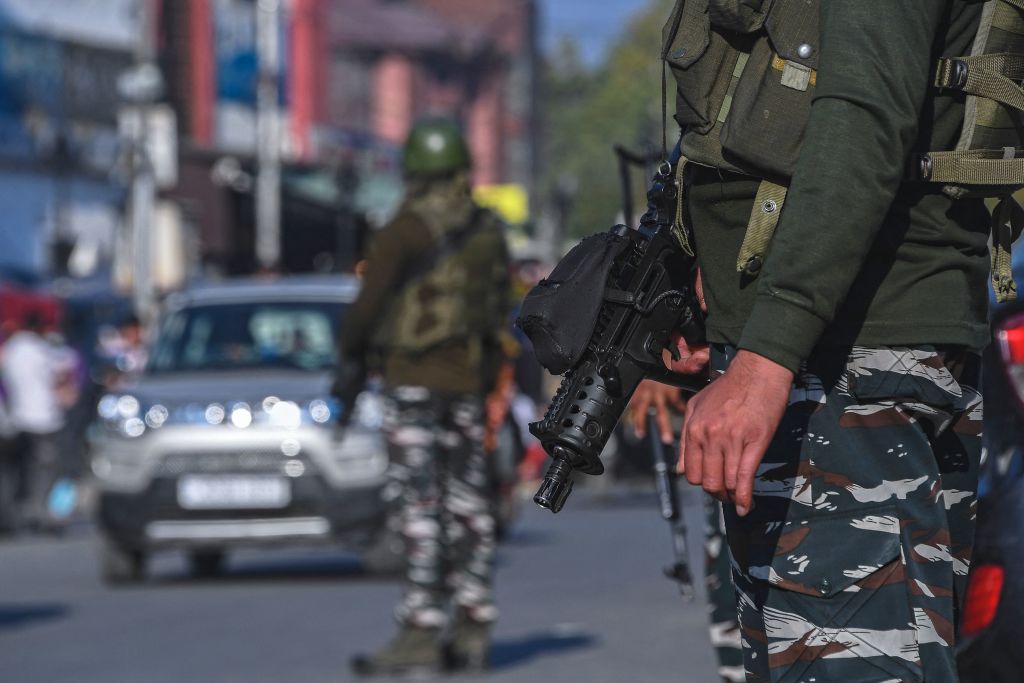 Security personnel stand guard along a street in Srinagar in Jammu and Kashmir on October 15, 2021. (Photo by TAUSEEF MUSTAFA/AFP via Getty Images)

THE security situation in Jammu and Kashmir is turning deadly each passing day. Clashes between rebels and government personnel and street killings saw six more lives being lost on Saturday (16), official sources said as the Himalayan region saw a worsening wave of terror and violence.

At least 28 people, including nine civilians, have been killed in the past two weeks, leaving the India security establishment worried, particularly in the wake of the Taliban’s return to power in Kabul, Afghanistan, which Indian observers feel would help anti-Indian terror outfits based in Pakistan.

On Saturday (16), two militants of The Resistance Front rebel group, an offshoot of the Pakistan-based Lashkar-e-Taiba, were killed outside Srinagar, the summer capital of Jammu and Kashmir, AFP cited police inspector general Vijay Kumar as saying. One of the deceased was top rebel commander Umer Mushtaq Khanday, the officer said.

Hours later after that incident, gunmen shot dead a street vendor and a labourer from outside Kashmir in separate shootings, police added.

Two soldiers also died in a “fierce firefight” near the highly militarised ceasefire line in the union territory, a statement from the Indian military said.

The Indian troops had been involved in a week-long hunt for rebels and the operation had already seen seven troops getting killed in the forested border area in Mendhar in the Poonch district of Jammu and Kashmir.

The Indian side started a massive crackdown following the killings of civilians, which also included a Sikh government school teacher, and more than 1,000 people suspected to have links with banned religious and militant groups were detained, AFP cited a police officer as saying on Saturday.

Tension has mounted in Kashmir after the Narendra Modi government scrapped the former state’s special status under the Indian Constitution in August 2019 to bring it directly under the rule of New Delhi. While the government defended the move saying it was taken to bring peace and prosperity in the restive region, local political parties have slammed the central government saying the opposite consequences were being seen.

Mirwaiz Umer Farooq, Kashmir’s chief Muslim cleric who has been under house arrest for more than two years now, said in a statement on Saturday that “systemic oppression” was pushing many Kashmir youths underground.