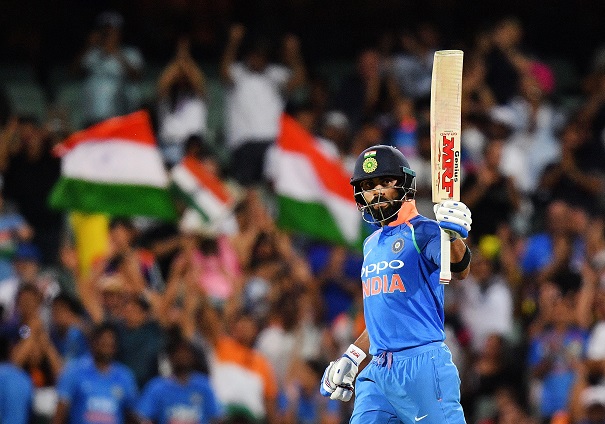 Kohli went a long way towards justifying his decision to bat first with a typically assertive innings of 120 off 125 deliveries, with 14 fours and four sixes adorning his 42nd ODI hundred as India totalled 279 for seven (Photo: Daniel Kalisz/Getty Images).

INDIAN captain Virat Kohli ended a run of 10 matches without a century Sunday (11), setting the platform for his team’s 59-run (DLS) victory over the West Indies in a rain-hit second One-Day International at Queen’s Park Oval.

Kohli went a long way towards justifying his decision to bat first with a typically assertive inning of 120 off 125 deliveries, with 14 fours and four sixes adorning his 42nd ODI hundred as India totalled 279 for seven.

Set a revised target of 270 off 46 overs when rain interrupted play during their chase, West Indies were on course at 179 for four in the 35th over but then crashed to 210 all out with four overs to spare as seamer Bhuvneshwar Kumar triggered the slide with figures of four for 31.

Kumar’s first wicket was near the start of the innings when he removed Chris Gayle, the hard-hitting opener falling for just 11 although it was enough to take him past Brian Lara for the most runs in ODI cricket by a West Indian, a record which now stands at 10,409.

It was also Gayle’s 300th ODI, making him the first West Indian to reach that landmark.

Following a no-result from the rain-ruined first ODI in Guyana three days earlier, India will defend an unassailable 1-0 lead going into the final match, also at Queen’s Park Oval, on Wednesday (14).

Man of the Match Kohli received excellent support from Shreyas Iyer who contributed 71 and featured in a 125-run fourth-wicket stand with his skipper.

As their partnership progressed through the middle overs of the innings a total closer to the 300-run mark seemed inevitable.

However Kohli’s dismissal to Carlos Brathwaite in the 42nd over triggered a mini-collapse and the West Indies retained their discipline through the final overs in conceding 67 runs over the last 10.

Brathwaite was the most successful of the bowlers, finishing with figures of three for 53 off 10 overs.

“It was a good outing with the bat,” was Kohli’s understated reaction to his chanceless innings. “You saw exactly why we wanted to bat first given the way the West Indies struggled in the latter half of their innings. It would have been even worse but for the rain during their innings.”

Sheldon Cottrell got the West Indies off to an excellent start when he trapped Sharma’s opening partner, Shikhar Dhawan, leg-before in his first over, a decision determined by the television official after on-field umpire Nigel Llong turned down the initial appeal.

Kohli’s eighth ODI hundred against the West Indies and second in succession in the Caribbean underlined both his supreme class and ravenous appetite for runs.

At no time in his innings was he troubled and it was only with his demise, followed closely by Iyer being bowled round his legs by West Indies captain Jason Holder, which eased the mounting pressure on the home side.

With the early loss of Gayle and then Shai Hope, West Indies relied on Evin Lewis to keep them in the hunt for the challenging target.

Despite wrenching an ankle and needing treatment on the field, the opening batsman kept his team up with the required rate in top scoring with 65.

However left-arm wrist-spinner Kuldeep Yadav dismissed the aggressive Shimron Hetmyer and then Lewis to tilt the balance in favour of India.

Nicholas Pooran, the West Indies’ outstanding batsman at the World Cup, stroked his way to 42 but it was his dismissal off Kumar which triggered the decisive slide as four wickets fell for just three runs in the space of three overs.

Fellow seamer Mohammed Shami claimed the last two wickets to leave the West Indies wondering what could have been if their talented young batsmen had matched their extravagant strokeplay with sensible shot-selection.

“We had the game in our hands,” said a disappointed Holder. “One of the main things our batsmen need to learn is that when they get in they need to carry through to the end. We’ve definitely got to take responsibility and ownership as batters.”