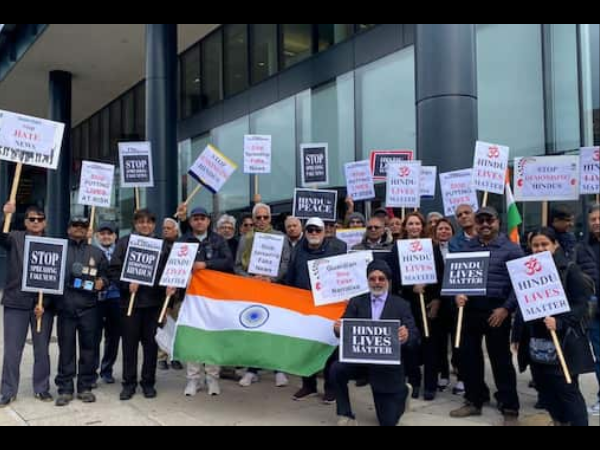 Several members of the Hindu community on Wednesday (28) gathered in front of the office of The Guardian to protest against the media house’s allegedly misleading and biased coverage of the recent violence in Leicester.

The protesters accused The Guardian of showing the Hindu community in poor light. It has also been alleged that the newspaper has been following an anti-Hindu narrative for many years now.

On Tuesday (27), a press release was issued that said, “As a result of Hindu hate-filled articles in The Guardian, a vigil will take place outside their premises” at Kings Place, London.

The Guardian has been pedaling its #Hinduphobia narrative for many years now. #EnoughIsEnough@Telegraph @BBCNews @DailyMailUK @Independent @spectator pic.twitter.com/PuxNfHD7QW

The protesters also handed over a memorandum to The Guardian’s chief of security which was addressed to the editor-in-chief, Katharine Viner. They also sought a response to it.

“There is no standard of professional journalism in Guardian coming from Delhi,” a Hindu community leader was quoted as saying by OpIndia, an Indian right-wing news portal.

He also said the protest on Wednesday was a warning to The Guardian and they would keep coming again if the media didn’t stop publishing what he called anti-Hindu and anti-India content.

Several photos and videos of the demonstration outside the newspaper’s office were shared on social media platform Twitter.

“India which is host to tens of thousands of persecuted groups does not need to be given homilies on being tolerant. The Zoroastrians, Bahai’s, Tibetan Buddhists and Jewish people have lived in India happily for centuries. There are millions of Christians living happily except for some evangelical missionaries trying to convert Hindus by abusing Hindus traditions and culture. Sometimes minorities can be unreasonable and confrontational. A majority is not always wrong because it is a majority and a minority is not always right because it is a minority,” one press release issued by a protesting group said.

US midterms: Five prominent Indian-Americans, including ‘Samosa Caucus’, in race for Congress

Indian-Americans celebrate Chhath Puja in several states across US