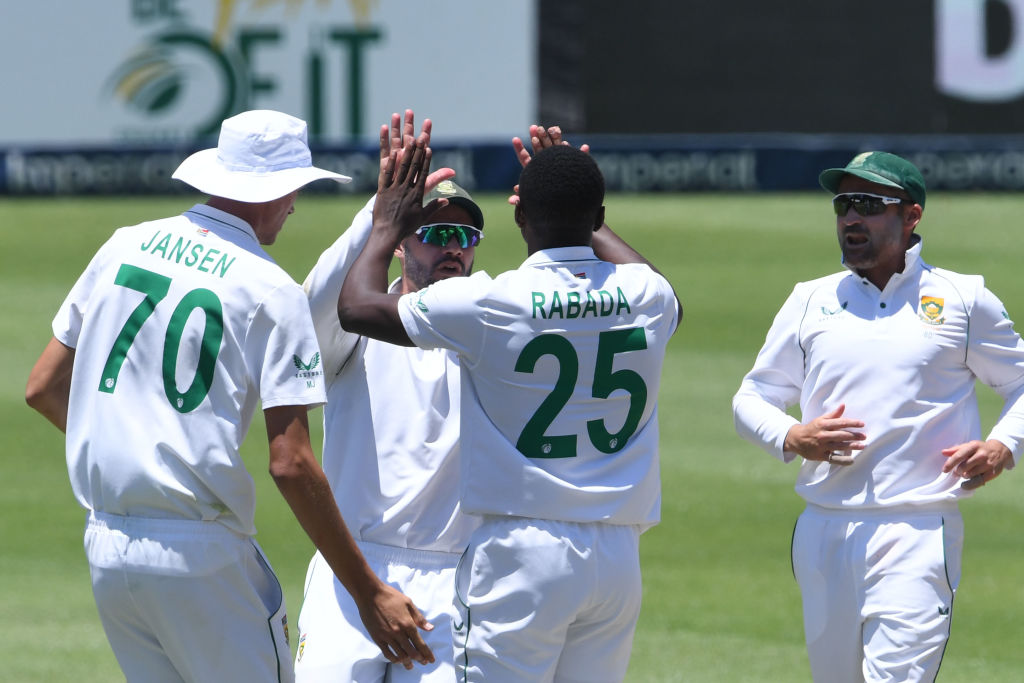 South Africa’s Kagiso Rabada celebrates the wicket of India’s Rishabh Pant with his team mates on Day 3 of the second Test match between South Africa and India at the Wanderers Stadium in Johannesburg, South Africa, on January 5, 2022. (Photo by Lee Warren/Gallo Images/Getty Images)

SOUTH AFRICA and India were engaged in a see-saw battle on the third day of the second Test match in Johannesburg on Wednesday (5) with the visitors setting the hosts a target of 240 to level the three-match series.

However, a determined show from the South Africa batters suggested that the outcome of the game was in their favour. They were 118 for 2 at stumps on Day 3, requiring another 122 runs with two days to go.

Earlier in the day, India, who resumed from their overnight score of 85 for 2 with Cheteshwar Pujara (53) and Ajinkya Rahane (58) on the crease, had a good beginning to the day. The duo, both of whom were looking for some form, added 70 more runs but got dismissed in quick succession that reduced India to 163 for 4. Kagiso Rabada picked both the batters and soon after, sent back wicket-keeper-batter Rishabh Pant (0) to leave the visitors at 167 for 5.

However, it was Hanuma Vihari’s fighting 40 not out and Shardul Thakur’s brisk 28 that helped India cross the 250-run mark and their second innings folded for 266 after conceding a first innings lead of 27.

Johannesburg Test: India bowled out for 202 in first innings

Rabada, Lungi Ngidi and Marco Jansen took three wickets each while Duanne Olivier got one wicket.

South Africa made a solid chase of the target with their first two wickets adding 93 runs. Opener and captain Dean Elgar was batting on 46 while Rassie van der Dussen was on 11 not out when the latest reports came in. The hosts lost Aiden Markram (31) and Keegan Petersen (28) during their pursuit of the target.

India won the first Test in Centurion by 113 runs and are one win away from registering their maiden Test series win on South African soil.