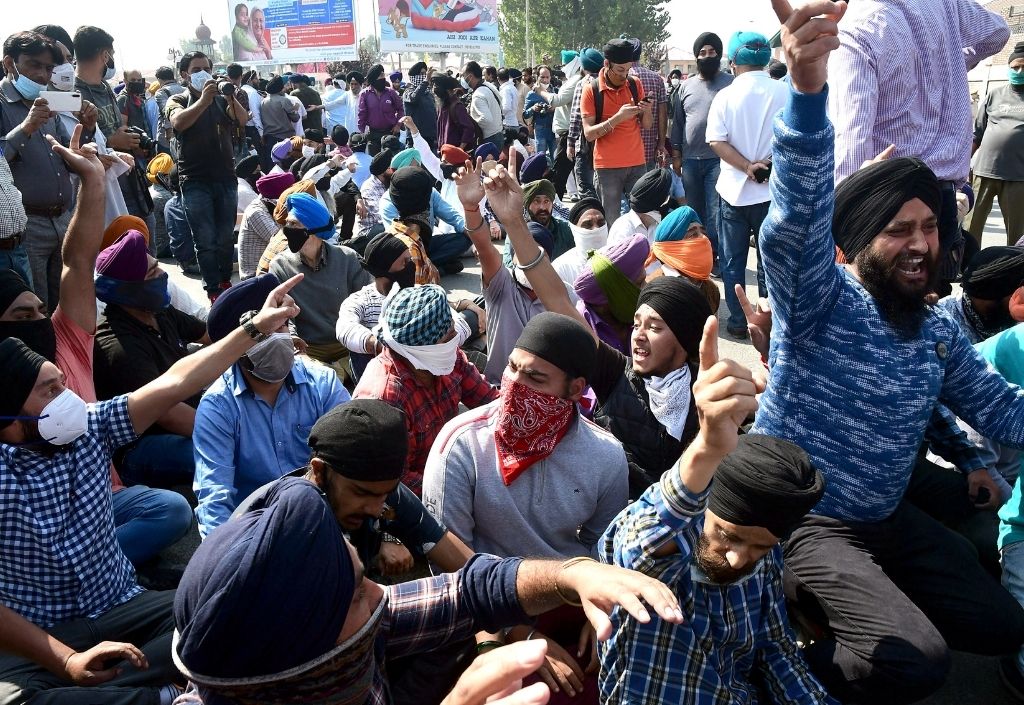 Sikhs stage a protest demanding justice over the killing of school teacher Supinder Kour in Srinagar in Jammu and Kashmir on Friday, October 8, 2021. (ANI Photo)

HUNDREDS of Sikhs organised a protest march in Jammu and Kashmir on Friday (8) at the funeral of a teacher from the community who was killed by suspected terrorists along with a colleague from the Hindu community.

Forty-six-year-old Supinder Kour was gunned down along with Deepak Chand in their school on Thursday (7), marking the third such attack claimed by The Resistance Front (TRF) terror outfit this week. Seven civilians have been killed in these attacks in all. The TRF is backed by Pakistani terror group Lashkar-e-Taiba.

The series of attacks have sparked an outrage as the minority communities in India’s only Muslim-majority province feared lack of security. Opposition parties have slammed J&K’s local administration as well as the Narendra Modi government at the Centre over the deteriorating conditions.

The protesting members of the Sikh community carried the body of Kour covered in a white shroud along a main street in Srinagar, the summer capital of Kashmir while shouting religious slogans and demanding justice.

They were joined by a few Muslim residents as well. The Sikhs make up around two per cent of J&K’s population.

According to Reuters, TRF said in an English statement issued on Thursday, “These teachers had on 15 August harassed and warned the parents with dire consequences if any student didn’t attend the occupier regime’s 15th August filthy (sic) function at their school.” The outfit was referring to India’s Independence Day celebrations.

The local government had issued orders ahead of the Independence Day asking thousands of teachers in J&K to organise events around India’s Tricolour with an aim to root out deep-running anti-India sentiment in the region.

The Modi government had in August 2019 scrapped J&K’s special status as was given under the Indian Constitution (Article 370), which sparked a new wave of anger. The  Indian security establishment believes that the change of guard in Afghanistan where the Taliban recently came back to power has threatened the situation in J&K.