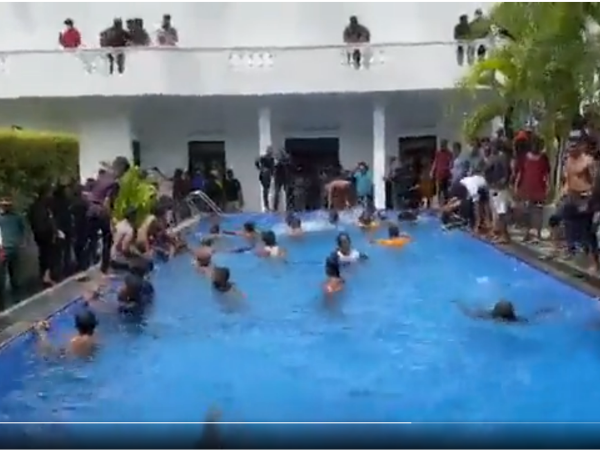 ON a day that would go down as a black one in the presidential history of Sri Lanka which is battling a severe economic crisis, protesters stormed the official residence of Gotabaya Rajapaska, the island-nation’s president, in Colombo on Saturday (9) demanding his resignation.

Worse, the protesters were seen enjoying swimming in the pool of the presidential palace and cooking in its kitchen. While videos surfaced showing the angry protesters carrying the national flag cooling off in the swimming pool, people were seen crowding the kitchen and gathering around a large table with utensils and other items scattered over it. Another group of people was seen cooking.

Gotabaya was escorted out of his endangered residence on Friday (8) by the security before the protesters entered the premises.

A top source in the government of Sri Lanka told Indian news channel NDTV that Rajapaksa was shifted to the country’s army headquarters last year after intelligence reports warned that the situation was not looking good and would spiral out of control.

Meanwhile, Lankan prime minister Ranil Wickremasinghe summoned an urgent meeting of party leaders to discuss the situation and find a resolution. He also requested the speaker of the country’s parliament to convene a session.

Lanka is battling severe food and fuel shortages besides marathon blackouts and runaway inflation after it ran out of foreign reserves to import essentials. Thousands of Sri Lankans have been protesting throughout the country, demanding the embattled president’s resignation.

A curfew which was issued on Friday ahead of Saturday’s mass rally was lifted after opposition parties and activists threatened to sue the chief of police.