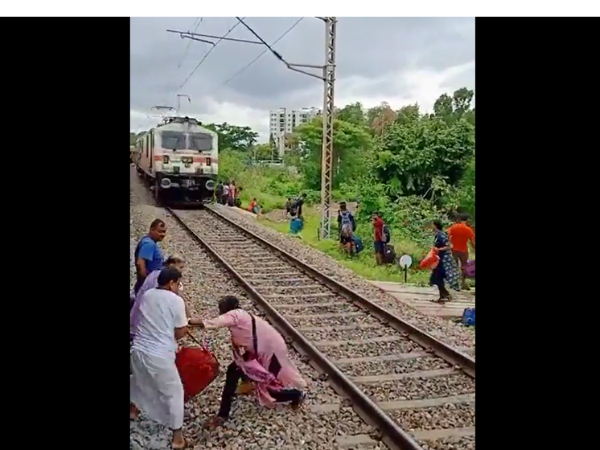 A woman put her life in great danger in India by crossing the railway tracks in front of a speeding train twice. (Image: Twitter screengrab)

ON track to become the world’s most populous nation next year, India is always witness to crowds jostling everywhere. There are many occasions when people even put themselves in danger while trying to commit a daring act. Recently, a video went viral on Twitter that showed yet another occasion when some railway passengers had a close encounter with death.

The people seen in the video were also perhaps trying something similar but when some people were trying to cross the adjacent tracks after getting down from their train, a speeding train approached fast. Some of the youth ran over the railway lines while some elderly people stayed back. One middle-aged woman, meanwhile, was seen committing the most daring act. She first ran to the other end to put a big bag and then returned to her original position again to pick another small piece of luggage. The approaching double-decker train, the horns of which blared,  was just metres away from her but luck backed her as she crossed the tracks just on time.

The people then just waited cautiously for the speeding train to pass.

While the location of the incident was not known, one person from the stationary train was heard warning them about the approaching train in Bengali.

Awanish Sharan, an Indian Administrative Officer, shared the video with a million-dollar advice in Hindi, “Zindagi Aapki Hain. Faisla Aapka Hain” (It’s your life. The decision is yours).

Netizens were shocked by the passengers act and specially chided the woman who put her own life in danger for a nondescript item.

Here are some reactions:

She came back for this.. pic.twitter.com/1VX4YCW9Cc

yeah…thats how north indians use public transport where ever they want to get down…even if they are run over by train, they would sue train but never follow rules. As if their fortunes get upside down if they wait just 2 minutes until train leaves or get down at station

Why people take such risk and that too along with children. Hey parabhu 🙄