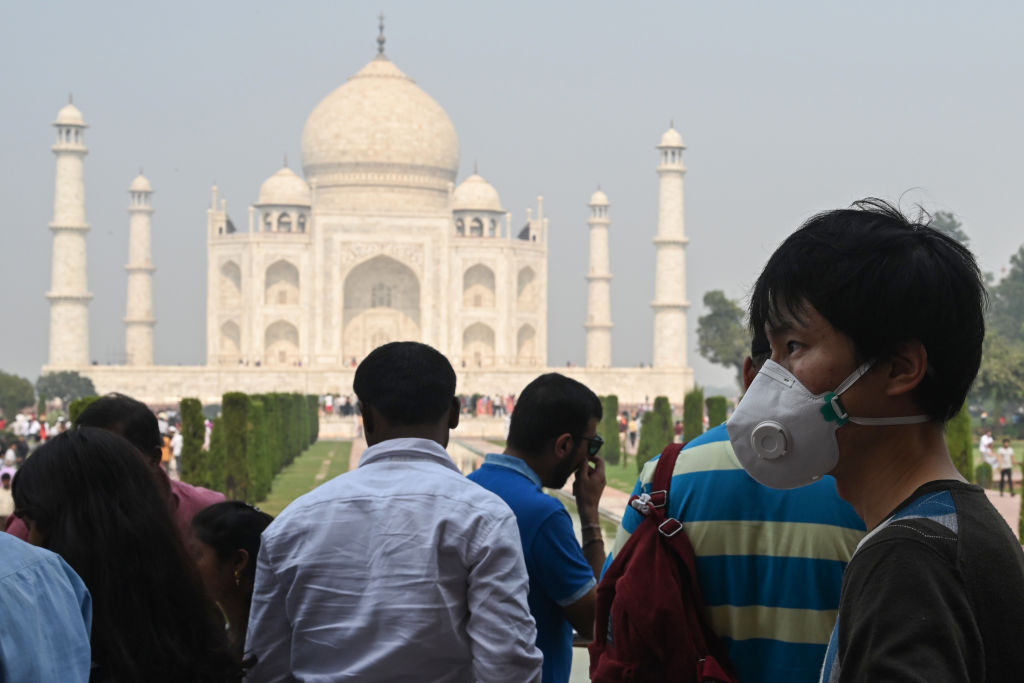 A tourist wears a face mask to protect against air pollution as they visit the Taj Mahal in Agra in the northern Indian state of Uttar Pradesh. (Photo by MONEY SHARMA/AFP via Getty Images)

Across South Asia, the average person would live five years longer if levels of fine particulate matter met World Health Organization (WHO) standards, according to a report from the University of Chicago’s Energy Policy Institute.

In the Indian states of Uttar Pradesh and Bihar, home to 300 million, crippling lung and heart disease caused by so-called PM2.5 pollution reduces life expectancy by eight years, and in the capital city of New Delhi by a decade.

PM2.5 pollution — 2.5 microns across or less, roughly the diameter of a human hair — penetrates deep into the lungs and enters the bloodstream.

In 2013, the United Nations classified it as a cancer-causing agent.

The WHO says PM2.5 density in the air should not top 15 microgrammes per cubic metre in any 24-hour period, or 5 mcg/m3 averaged across an entire year.

Faced with mounting evidence of damaging health impacts, the WHO tightened these standards last year, the first change since establishing air quality guidance in 2005.

“Clean air pays back in additional years of life for people across the world,” lead research Crista Hasenkopf and colleagues said in the Air Quality Life Index report.

Almost all populated regions in the world exceed WHO guidelines, but nowhere more so that in Asia: by 15-fold in Bangladesh, 10-fold in India, and nine-fold in Nepal and Pakistan.

Central and West Africa, along with much of Southeast Asia and parts of central America, also face pollution levels — and shortened lives — well above the global average.

Surprisingly, PM2.5 pollution in 2020, the most recent data available, was virtually unchanged from the year before despite a sharp slow-down in the global economy and a corresponding drop in CO2 emissions due to Covid lockdowns.

“In South Asia, pollution actually rose during the first year of the pandemic,” the authors noted.

One country that has seen major improvements is China.

PM2.5 pollution fell in the nation of 1.4 billion people by almost 40 percent between 2013 and 2020, adding two years to life expectancy.

But even with this progress, lives in China are on average cut short today by 2.6 years.

The worst-hit provinces include Henan and Hebei, in north-central China, and the coastal province of Shandong.

Compared to other causes of premature death, the impact of PM2.5 pollution is comparable to smoking tobacco, more than three times that of alcohol use, and six times that of HIV/AIDS, the report said.