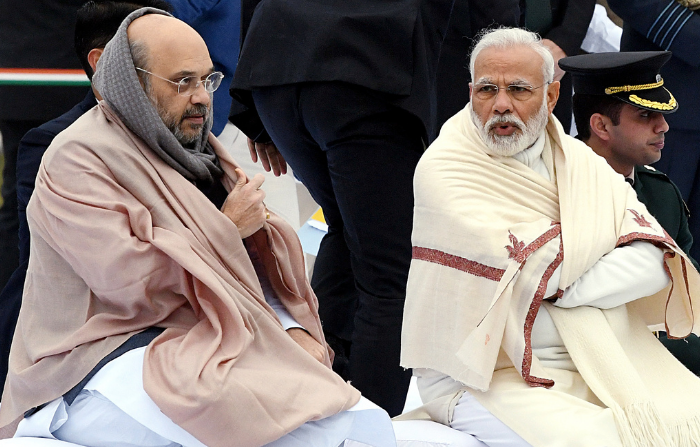 INDIAN home minister Amit Shah has remarked that the country’s 280 million illiterate adults are a burden on it and even cautioned that those people could never become good citizens.

Shah, who was speaking in an interview with Sansad TV, the government television service that broadcasts programmes in India’s parliament and those related to other public affairs, on the occasion of prime minister Narendra Modi’s 20 years of public life, said how the current government has contributed towards increasing enrolment in schools.

“When you evaluate this, you will know what could be its contribution towards a nation’s progress. Ek anpadh aadmi desh par kitna bada bojh banta hai. Na jo apne Samvidhan ke diye hue adhikaro ko jaanta hai, na smvidhan ne humse jo apeksha kari hai wo dayitva ko jaanta hai. Wo kaise ek achcha nagrik ban sakta hai? Iske andar amulchur parivartan hai. (An illiterate person is a big burden on the country. He neither knows the rights given to him by the Constitution, nor knows the duties expected of him by it. How can such a person become a good citizen?)

Hindi not competing with other Indian languages: Shah

“At that time (when Narendra Modi became the chief minister of the western Indian state of Gujarat), the biggest problem was the dropout rate. He started an enrolment process as if it was a festival and took it to 100 per cent. He formed a committee of parents. If a child did not come to school, it was pondered upon. Responsibility of teachers was fixed. The result was that the dropout rate dropped from 37% to less than 1 per cent,” Shah, who also hails from Modi’s home state Gujarat and had been its home minister when Modi was in office.

In the interview, Shah hailed Modi as a “democratic leader” and said even his critics would agree that the Union Cabinet has never functioned as democratically as it has during the current regime.

He rubbished allegations that Modi is an autocratic leader saying the latter gave importance to all worthy suggestions given by anybody irrespective of their designation of position in the hierarchy. The home minister also said Modi never stepped back from taking political risks for decisions that are in the country’s interest.

“I have closely seen both Modi and his style of working. I have never seen a patient listener like him. Whatever may be the issue, he listens to everyone and speaks least, and then takes a proper decision,” Shah, 57, said. He added that Modi has always maintained that he is in power to change the country and not just run the government.

However, Shah’s remark on illiteracy irked sentiments even though literacy is considered to be vital in India for better living. Harsh Mandar, a social activist and former civil servant who is among the most vocal critics of the Modi government, objected to Shah’s remarks.

“He (Shah) devalues the significant learning that working and farming people depend on to survive and also resist injustice. It is India’s unlettered people who consistently display the greatest faith in a democracy that has constantly let most of them down,” Mandar said, The Times reported.

Indraani Singh, founder of Literacy India was also angered by Shah’s take. She said the poor may not be literate but they know their rights. Knowing how to read and write was only one aspect of good citizenship, according to her.

“Soldiers in the Indian Army almost all come from humble backgrounds with little education, yet they are prepared to sacrifice their lives for the sake of the country. Can there be a better example than that of being a good citizen?” she asked.

India’s literacy rate was found to be a paltry 18 per cent in the first post-Independence census but seven decades later, it has gone up to 74 per cent. Yet, a mammoth 280 million adults in India can not read or write.

The government has set its eyes on 100 per cent adult literacy by 2030.