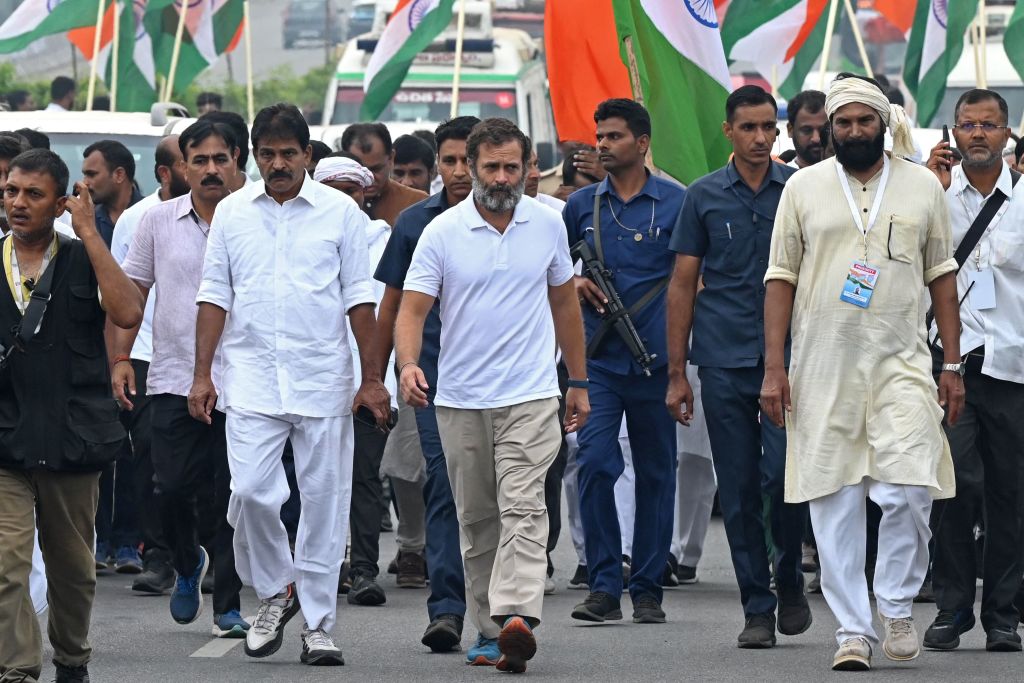 Indian National Congress leaders in the central Indian state of Madhya Pradesh have suddenly engaged in jogging, exercising and other fitness activities.

Are they preparing for any sporting event?

No, they are doing it just to match the footsteps of top leader Rahul Gandhi, 52, ahead of the Bharat Jodo Yatra’s (Unite India March) entry into the state.

The march, which began from Kanyakumari in the southern state of Tamil Nadu on September 7 with an aim to mobilise popular support for the grand-old party, covers nearly 25 kilometres every day.

It will enter Madhya Pradesh from Maharashtra on November 20.

The party’s member of the legislative assembly and former Madhya Pradesh minister P C Sharma told Press Trust of India that he has been practising brisk walking since a month and even bought a new pair of shoes for the first time to participate in the yatra.

“I only wear slippers and have never worn shoes. I have been doing brisk walking for more than five kilometres daily to keep pace with Rahulji’s walking speed,” the 66-year-old legislator said.

Sharma said he had walked during the yatra with Gandhi in Hyderabad in Telnagana and Bellary in Karnataka.

“It is too hard to match his speed. I am eagerly waiting for our leader’s yatra to enter Madhya Pradesh,” he added.

All India Congress Committee member from Madhya Pradesh Jagdish Saini said he gets up at around 5 am and has been going for a walk regularly for last four to five years. ”

But since the last 10 days, I have been jogging twice daily – in the morning and evening – in a bid to keep pace with Rahul Gandhi,” the 67-year-old leader said.

Congress leader and Bhopal Development Authority’s former vice chairman P D Sharma said he wakes up at 4 am and goes for jogging to a park to remain fit and to also shed some weight.

“I am doing this since Rahulji started the yatra from Kanyakumari on September 7,” he said. The 59-year-old leader said he was counting the days for the yatra to enter MP and would go to Burhanpur on November 20, when the foot march will enter the state.

“I want to walk with Rahulji. I have bought a brand new pair of jogging shoes and 10 kurta-pyjama sets for the yatra. I weigh 87 kg and want to shed some kilos to run alongside our leader,” he added.

MP Congress’s Right to Information cell chief Puneet Tandon said he gets up at 5.30 am and goes to the Bharat Heavy Electricals Limited (BHEL) ground where he jogs, runs and does cycling for two hours.

“I have been following this fitness regime since the last 30 days. I am super excited about Rahulji’s visit. I have been working out to keep pace with our leader,” Tandon (39) said.

MP Congress spokesman Awanish Bundela said he has been walking and exercising in the morning for last five years.

“But in view of Rahulji’s visit, I have started jogging in the evening as well since the last 10 days. I am going to take part in the yatra,” the 43-year-old leader said.

The Bharat Jodo Yatra, a mass contact initiative of the Congress, is scheduled to enter Bondarli in Burhanpur district of Madhya Pradesh on November 20 evening.

It will pass through 12 states before culminating in Jammu and Kashmir after spanning a distance of 3,570 km over nearly 150 days.