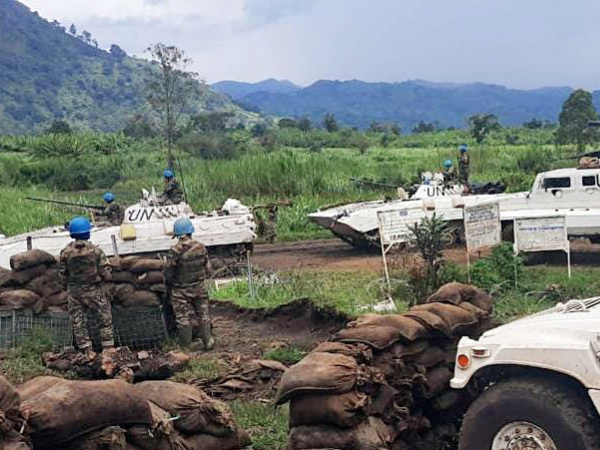 TWO Border Security Force (BSF) personnel, who were part of the UN peacekeeping mission in the Democratic Republic of Congo, were killed on Tuesday (26) during violent protests in the Central African country, a BSF spokesperson and sources in the United Nations said.

India’s external affairs minister S Jaishankar said he was deeply grieved at the loss of the two valiant Indian peacekeepers and demanded that the perpetrators of the “outrageous attacks” must be held accountable and brought to justice.

“The perpetrators of these outrageous attacks must be held accountable and brought to justice,” Jaishankar said in tweets written in English and Hindi.

Deeply grieved at the loss of lives of two valiant Indian peacekeepers of the BSF in the Democratic Republic of Congo. They were part of the MONUSCO.

The perpetrators of these outrageous attacks must be held accountable and brought to justice .

Deepest condolences to the bereaved families.

He also extended his condolences to the bereaved families.

The two soldiers were part of MONUSCO (United Nations Organization Stabilization Mission in the Democratic Republic of the Congo or MONUC — an acronym which is based on its French name).

At least five people were killed and about 50 others injured on the second day of demonstrations in Congo’s eastern city of Goma against the United Nations mission in the country, the Associated Press reported from Kinshasa, the African nation’s capital.

Both the deceased BSF personnel were in the rank of head constable and hailed from the north-western state of Rajasthan, a senior officer said.

“On 26 July, two BSF personnel of the UN Peacekeeping Contingent (MONUSCO) deployed at Butembo, Democratic Republic of Congo, succumbed to fatal injuries during the violent armed protests,” a spokesperson for the Border Security Force (BSF) said in New Delhi.

Officials said two platoons or around 70-74 BSF troops were deployed in the area and they were inducted in May this year.

Farhan Haq, deputy spokesperson for UN secretary general Antonio Guterres, said at the daily press briefing at the United Nations on Tuesday that violence against the UN peacekeeping mission in the Democratic Republic of the Congo is “continuing to escalate.”

He said attackers snatched weapons from Congolese police and fired upon the UN uniformed personnel at the MONUSCO base in Butembo on Tuesday.

“Sadly, one military peacekeeper and two UN police personnel were killed and another was injured. We add our voice to the acting head of MONUSCO Khassim Diagne to condemn the killing of our colleagues and to express our deepest sympathy to their families and colleagues.”

In response to a question by Press Trust of India on the killing of the Indian peacekeepers, Haq said, “This is something that should not have happened. It is unacceptable action. And we condemn the killing of our colleagues. We do express our deepest sympathies to the families and colleagues and of course we send our sympathies as well to the Government of India for this. I believe we’ve been in touch with the Indian Mission on the fallen peacekeepers.”

Haq said Diagne has described the violence against the UN as “absolutely unacceptable and counterproductive” given that the UN mission is in the country to work alongside local authorities, to protect civilians, deter armed groups and build the capacity of state institutions and services. Diagne called on Congolese authorities, civil society and community groups to denounce the violence.

“It is not in chaos and confusion or division that we will make progress towards stability and peace,” Diagne said.