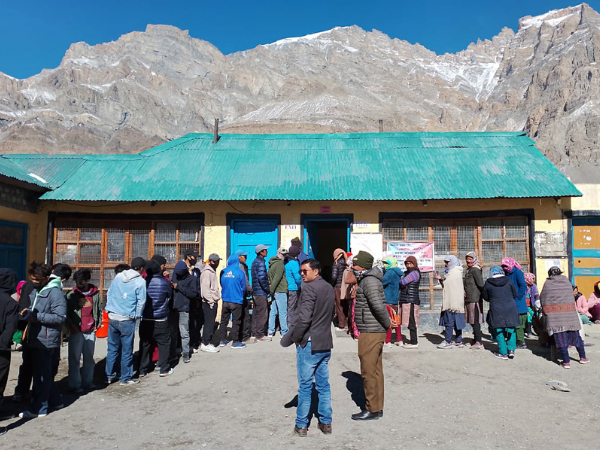 Voters wait in queues to cast their votes for Himachal Pradesh assembly elections, at a polling booth, in Lahaul and Spiti on Saturday. November 12, 2022. (ANI Photo)

Voting concluded for all of the Himalayan state’s 68 seats and the results will be announced on December 8, along with that of Gujarat where polls are due on December 1 and 5.

Experts are curious to know whether Himachal will continue to see its change of guard every election or the BJP breaking the tradition to come to office for the second successive time.

The ruling party has pitched the faces of both prime minister Narendra Modi and state chief minister Jairam Thakur before the electorate, arguing in favour of a “double engine” — meaning the presence of the same party in power in New Delhi and the state will ensure unhindered development work.

The saffron party has also cited the example of the neighbouring state of Uttarakhand, which went to elections earlier this year and voted the BJP back to office for the second consecutive time after 2017.

The Congress, on the other hand, has banked on the tradition and hopes Himachal would not see any exception this time either.

The party has faced a challenge in the state ever since the death of Virbhadra Singh, a towering politician from the state who had been its chief minister several times, in July last year. But the Congress is still optimistic to return to power saying its seat-wise allocation of seats has been “much better than before” in this election.

Singh’s widow Pratibha Singh is the party’s state unit chief while son Vikramaditya is among one of its candidates.

The opposition party will also bank on the fact that the BJP faced rebels in its ranks. Former chief minister Prem Kumar Dhumal, who served for two terms, decided against contesting this election and while he said it was his decision, speculation was rife that he was denied a ticket.

For the Congress, the battle for Himachal is a prestigious one as it has been losing a series of elections in the last many years. Earlier this year, it lost power in Punjab, another northern state, to the Aam Aadmi party, besides losing in the key state of Uttar Pradesh. It will look to end the year on a high with some decent results in the two BJP-ruled states of Himachal and Gujarat.