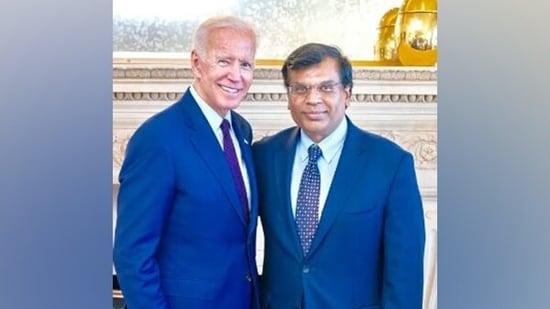 Vivek Lall, an Indian-origin General Atomics Global Corporation chief executive, is honoured with the Lifetime Achievement Award by US President Joe Biden with the citation of ‘With Grateful Recognition’.

The citation was given to Lall, who has done PhD in Aerospace Engineering from Wichita State University in Kansas, by the AmeriCorps and the Office of the President. It was also personally signed by the President of the United States, as per the official statement. AmeriCorps is a part of the US Government. The organisation aims to foster activities that bring Americans closer together to “serve communities.”

Dr Lall, an industry leader and scientific community titan works as Chief Executive at General Atomics. The company is a global leader in the specialised fields of nuclear technology and has developed state-of-the-art Unmanned Aerial Vehicles (UAVs) like the Predator, Reaper and Guardian drones.

Lall, a son of an Indian diplomat, was one of the handful of individuals with Indian origins to have been invited to meet Indian Prime Minister Narendra Modi, the past year during his Washington visit.

Notably, before his leadership position in General Atomics, Dr Lall worked at other leading organisations like NASA, Raytheon, Boeing and Lockheed Martin; his experience and accolades have been considered unparalleled by many in the scientific community and by long-term industry watchers alike.

He is serving as a US Technical Team Member to the Noth Atlantic Treaty Organisation (NATO) Science and Technology (STO) with the Pentagon.

He was appointed in a critical advisory role to the US Cabinet Secretary heading the Department of Transportation, encompassing entities like the Federal Aviation Administration (FAA), in 2018.