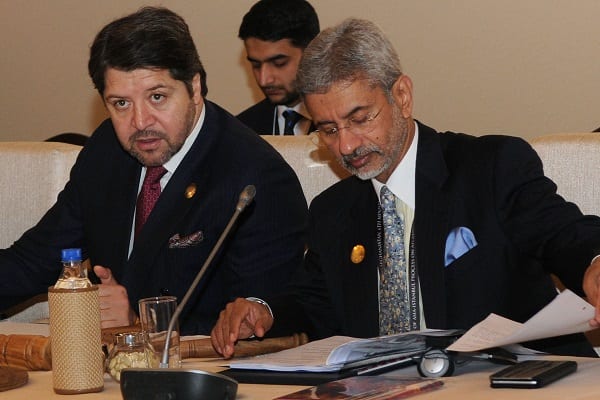 In a series of tweets, Jaishankar said his meeting with Chinese Foreign Minister Wang Yi “was helpful in stock-taking of our relationship.” (Photo: NARINDER NANU/AFP/Getty Images).

INDIA’S External Affairs Minister S Jaishankar held bilateral meetings with his counterparts from China, Australia and Ukraine and discussed a variety of issues such as energy, technology and boosting bilateral ties.

In a series of tweets, Jaishankar said his meeting with Chinese Foreign Minister Wang Yi “was helpful in stock-taking of our relationship.”

Jaishankar added he was “happy to meet” Czech Foreign Minister Tomas Petricek and “discussed India’s cooperation with the Czech Republic, Visegrad Group and the European Union.”

With the Australian Foreign Minister Marise Payne, Jaishankar had “a productive meeting” and the two sides agreed to work together to enhance quality of ties.  In his meeting with the Foreign Minister of Albania Gent Cakaj, Jaishankar said India looks forward to creating a contemporary framework for the bilateral relationship.

With his Ukrainian counterpart Vadym Prystaiko, Jaishankar said there was a good exchange of views on various subjects including energy security, technology collaboration and business possibilities. “Appreciate his positive approach to bilateral cooperation,” he tweeted.

Describing his meeting with Italian Foreign Minister Luigi Di Maio as an “energizing conversation”, Jaishankar said the two sides agreed on taking forward the very positive trajectory of bilateral ties. “India and Italy will work together closely, in nation building as well as in global affairs.”