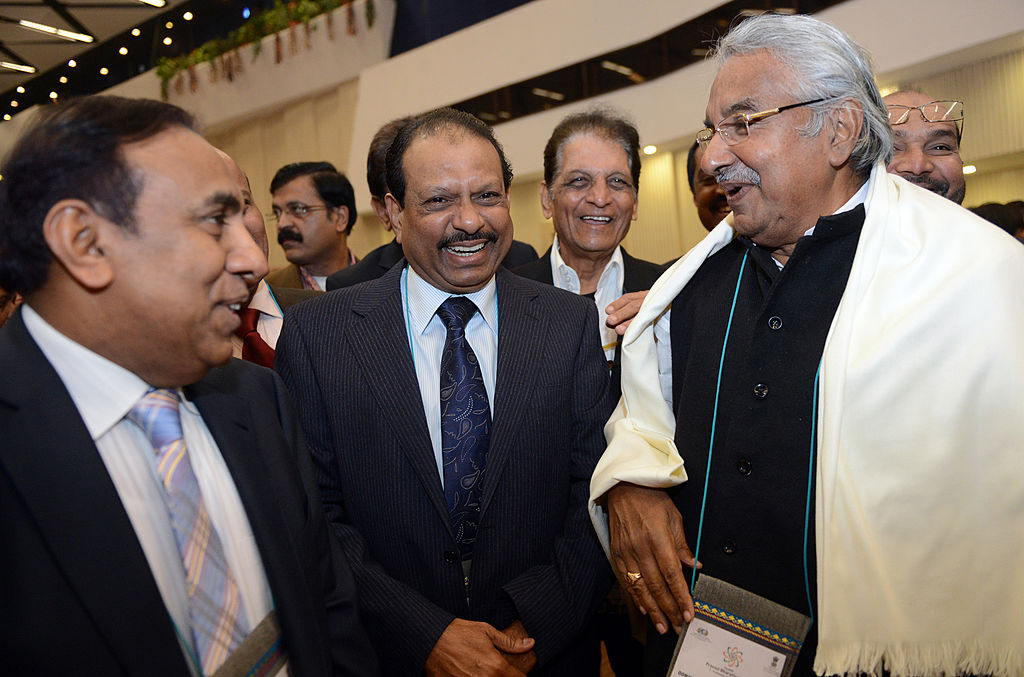 MA Yusuff Ali, the chairman and managing director of the Lulu Group (centre) with Oommen Chandi, the former chief minister of the southern Indian state of Kerala. (Photo by RAVEENDRAN/AFP via Getty Images)

RETAIL giant Lulu has announced investment worth Rs 2,000 crore (£199 million) to develop a shopping mall near Ahmedabad in the western Indian state of Gujarat. The United Arab Emirates-based company will investment as part of its plans to expand business in India, Mint reported.

The Lulu Group has signed a memorandum of understanding with the government of Gujarat, it said in a statement on Saturday (11).

The company already has three operational malls in India and will open two more in the country by Match 2022, it was reported.

“The Lulu Group will invest ₹2,000 crore in the state of Gujarat to set up a modern shopping mall,” the company said.

The investment plan was announced during a meeting between Yusuff Ali MA, the chairman and managing director of Lulu Group, and Bhupendra Patel, the chief minister of Gujarat, Bhupendra Patel, in Dubai. Gujarat is ruled by India’s ruling Bharatiya Janata Party and is the home state of prime minister Narendra Modi.

Patel, who took over as the chief minister in September, is on an official visit to promote Vibrant Gujarat Global Summit, which will be held in Gandhinagar, the state capital, in January and attract foreign direct investment into the state.

The Lulu Group, under its agreement with the Gujarat government, will set up a shopping mall between the cities of Ahmedabad and Gandhinagar which will generate more than 5,000 jobs. The construction of the mall is expected to begin by the first quarter of 2022 and will be completed in 30 months.
“Government of Gujarat will facilitate Lulu Group with all necessary assistance and clearances and also depute a senior IAS official to follow up the procedures,” the statement said.

Apart from the mall, the Lulu Group will also build food-processing and logistics centres in Baroda and Surat for exports in the second phase of investment in the state, the Mint report added.

Lauding Lulu Group’s decision, Patel said, “I welcome Ali’s promise to invest in Gujarat. The government will make every effort to ensure that land and any other assistance is provided to the group so that they can begin work.”

“Gujarat holds a very special place in my heart, this is where I first learnt the basics of business as my father had family business in Ahmedabad. So I feel very excited to invest in Gujarat and hope we can expand further in this vibrant state,” the Kerala-born Yusuff Ali MA said.

Lulu currently operates more than 220 hypermarkets and shopping malls in the Middle East, besides in countries like India, Indonesia and Malaysia. Globally, Lulu employs more than 57,000 people.

Lulu hypermarkets and department stores have a 32 per cent share of the retail market in Gulf Cooperation Council countries.

In October, the retail company opened its third shopping mall in Bengaluru in the southern Indian state of Karnataka.

Ali told the Press Trust of India that the company is committed to invest around Rs 4,500 crore for the development of five shopping malls in India in the first phase of expansion in the country.

Out of the five, three have already become operational in Kochi and Thrissur in Kerala besides the one in Bengaluru.

The Lulu Group also said on Saturday that its latest mall in Kerala’s capital Thiruvananthapuram will be opened next week while Lucknow Lulu Mall is likely to be open for shopping by March next year.