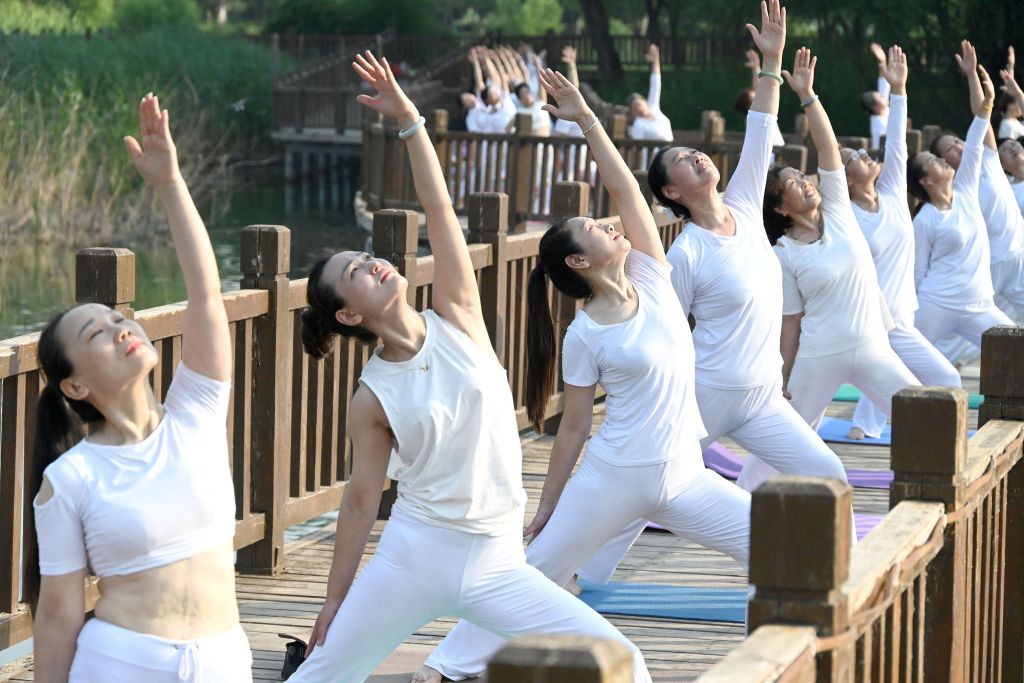 THOUSANDS of yoga enthusiasts from across the world on Tuesday took part in mass yoga sessions to mark the 8th International Day of Yoga as the celebrations returned to an in-person format after over two years following the COVID-19 pandemic.  The event was marked this year under the theme “Yoga for Humanity”.

A series of outdoor yoga events have been organised across the UK to mark the International Day of Yoga.

The Indian High Commission in London led the celebrations with community events kicking off since last week, culminating in a central 8th International Day of Yoga event on Tuesday at the BAPS Swaminarayan Mandir, known as Neasden Temple, in London.

“This year the theme is Yoga for Humanity. As the Honourable Prime Minister has said, Yoga is not just about exercise, it’s a way to discover the sense of oneness with yourself, with the world and with nature,” said Indian High Commissioner to the UK Gaitri Issar Kumar.

The Nehru Centre in London, the cultural wing of the High Commission, has organised “Yoga Session and Guided Meditation” with SRMD Yoga centre in the UK, with a series of yoga demonstrations being recorded at iconic London monuments such as Trafalgar Square, London Eye, Houses of Parliament, Big Ben and the Tower of London.   It culminated in a special “Yoga In London” video, depicting yoga sessions at the various monuments beginning with a gathering of hundreds at Holland Park in central London on Friday.

Indian consulates across different parts of the UK similarly organised open air yoga sessions, after being forced into virtual mode due to the pandemic over the last few years.

Across Europe, the Embassy of India in The Hague, Netherlands, celebrated the Yoga Day at Atrium City Hall on Friday. The event saw the participation of more than 500 yoga enthusiasts and practitioners from across the Netherlands.

The Ambassador of India to the Netherlands, Reenat Sandhu, opened the celebrations with the lighting of the lamp along with senior officials of the government of the Netherlands, who also participated in the yoga session.

In her address, Sandhu highlighted the health and spiritual benefits of yoga, especially during the pandemic.   The day was celebrated by the Indian Embassy in Kathmandu in the presence of Prime Minister Sher Bahadur Deuba.

Deuba said that practising Yoga gives positive energy to the body and mind and that it should be made a part of one’s daily life.

A lecture-cum-demonstration of the Common Yoga Protocol approved by the Ministry of Ayush was organised at the Embassy. Nearly six hundred Yoga enthusiasts attended the session. The event was broadcast live on Doordarshan as part of the ‘Guardian Ring –One Sun, One Earth’ initiative of the Government of India.

On the eve of Yoga Day, the Embassy also organised a special yoga session in association with the School of Medicine, Kathmandu University.

In China, the Indian Embassy in Beijing organised a yoga session. “#IDY2022 momentum continues : Celebrating 8th International Day of Yoga, Team We Yoga of Guru Ashish Bahuguna conducted a refreshing morning Yoga session at the Embassy of India, Beijing,” the Indian mission in Beijing tweeted.    It also announced the winners of a photo competition on how yoga attains its ethereal beauty through the relationship it establishes with nature.

“Gave an experience of uniting the body with the mind. The Day marks the culmination of a series of #yoga events across #SriLanka over the past few days,” it said.

In Maldives, a mob stormed and temporarily disrupted an event related to the International Day of Yoga at the national football stadium in the national capital which was attended by ambassadors, diplomats and members of the general public, attacking some of them and destroying property.         Maldives Police Service has launched a high priority investigation into the violent disruption of the event. So far, six persons have been taken into custody.

The Government of Maldives strongly condemned the “violent acts perpetrated by a group of individuals” targeting the participants of the yoga day event.
Indian High Commission in Canberra celebrated the day at the iconic location of ‘the Gabba’, the Brisbane Cricket Ground. “@HCICanberra  celebrated 8th #InternationalDayofYoga in the iconic location of ‘the Gabba’, Brisbane today morning and became part of #GuardianRingForYoga. #YogaForHumanity,” the Indian mission tweeted.

Deputy Prime Minister and the Defence Minister of Australia Richard Marles who is visiting India posted a picture on Twitter while doing Yoga.  “An early morning start with some yoga, ahead of a busy couple of days here in India. Looking forward to a packed couple of days, meeting my counterparts and seeing firsthand our close partnership,” he tweeted.

“A healthy, holistic #YogaDay to everyone May all be happy & free from disease especially in covid era Celebrate #InternationalDayofYoga, in person, 1st time since 2019 in Dhaka,” the Indian High Commission in Dhaka tweeted.

The Indian High Commission in Islamabad celebrated the day on Sunday.   “Underscoring message of yoga for humanity, High Commission of India @IndiainPakistan celebrated International Day of Yoga #IDY2022 today with enthusiasts from diplomatic corps and other eminent personalities,” it tweeted.