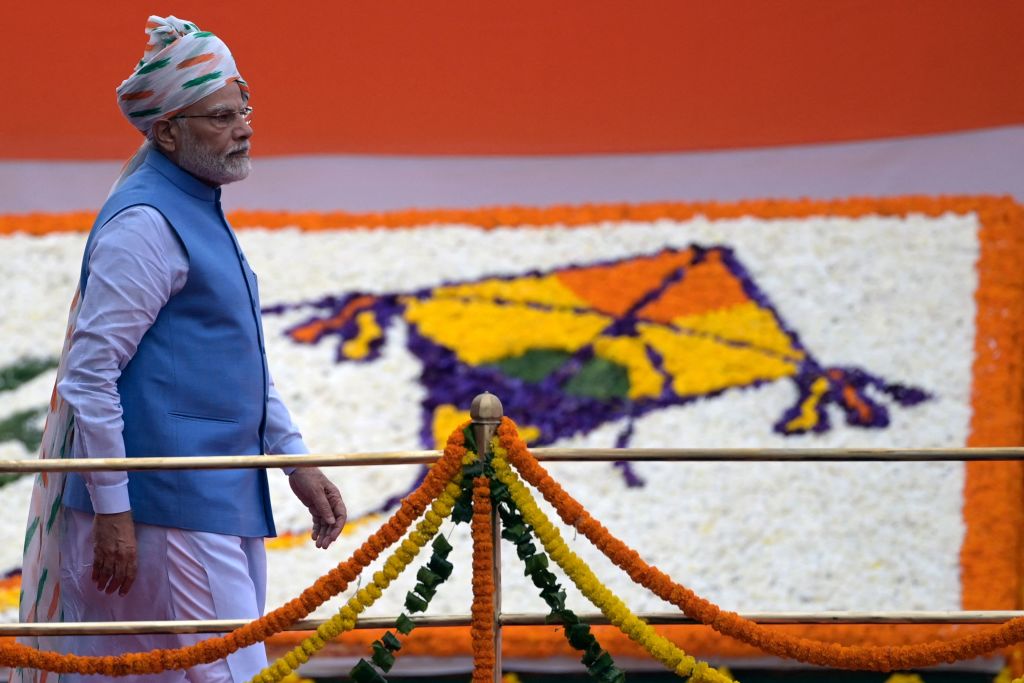 Indian prime minister Narendra Modi arrives to address the nation from the ramparts of the Red Fort during the celebrations to mark countrys Independence Day in New Delhi on August 15, 2022. (Photo by MONEY SHARMA/AFP via Getty Images)

The Indian opposition on Monday (15) took a dig at prime minister Narendra Modi over his ‘nari shakti’ (women power) remark made in the Independence Day speech in Delhi, asking him to take a look inwards and on his Bharatiya Janata Party’s (BJP) attitude towards women.

Derek O’Brien, a leader of the opposition Trinamool Congress (TMC) reminded the prime minister of his taunting “Didi O Didi” (Oh my elder sister) comment made on West Bengal chief minister Mamata Banerjee during an election rally in the eastern state last year.

“Let’s pledge to wipe out misogyny’ said Prime Minister @narendramodi today. Completely agree, Sir. Should we start with you, leading by example,” wrote O’Brien on Twitter, attaching a video of Modi making the reference to Banerjee in his speech.

Should we start with you, leading by example. pic.twitter.com/E4dP9l5TMr

Modi, who addressed his ninth Independence-Day speech as the prime minister from the ramparts of Red Fort, urged people to pledge not to do anything that lowers the dignity of women, saying a mentality to insult them in speech and behaviour has crept in.

Pawan Khera of the Indian National Congress, the country’s main opposition party, too posted a video compilation of Modi’s remarks on women, including remarks made on the floor of the House on parliamentarian Renuka Chowdhury in the Rajya Sabha or Upper House of the parliament over her laughter which was condemned as “sexist” and jibe at parliamentarian Shashi Tharoor over his late wife Sunanda Pushkar who Modi termed as “50-crore girlfriend” (girlfriend worth millions).

“If anyone needs the most to take a pledge to respect women, then it is this person,” Khera wrote, referring to the video.

Communist Party of India leader D Raja also urged Modi to examine the attitude of his own partymen towards women.

“It is not just about women. All humans should be treated with respect in society. This is not happening because the mindset is being controlled by a party which believes in the Manusmriti, patriarchy and caste system. This government has the numbers in both the Houses of Parliament, yet they have not passed the women reservation bill. His speech is mere rhetoric and there is no serious commitment whether towards women or towards the socially backward,” said Raja, who also raised incidents against women and the Dalits where Modi has chosen to remain silent.

Shiv Sena leader and Rajya Sabha MP Priyanka Chaturvedi said Modi’s words did not match the actions on the ground.

“If we look at Maharashtra not having any woman in cabinet with even the women and child portfolios being handed by male ministers. Even the labour force participation is rapidly decreasing and the government is not able to address them, she said. There is also the matter of 33 per cent reservation being championed by the BJP, and despite having a full majority, it has not been implemented. So, those are the issues that we are looking at in 25 years from now. We also have to look at how policies have impacted the women on ground,” Chaturvedi said.

She also tweeted citing the example of the western state of Maharashtra where the recently formed government of chief minister Eknath Shinde backed by Modi’s BJP got no woman minister. “Is this the Nari Shakti model that was spoken about in the I-Day speech?” she asked, citing the appointment of Mangal Prabhat Lodha, a male, as Maharashtra’s women and child welfare minister.

Is this the Nari Shakti model that was spoken about in the I-Day speech? – no woman minister in Maharashtra cabinet. https://t.co/J6HX0EBnYC

She also referred to the ‘Sulli and Bulli deals’ incident in which women were berated and auctioned on social media.