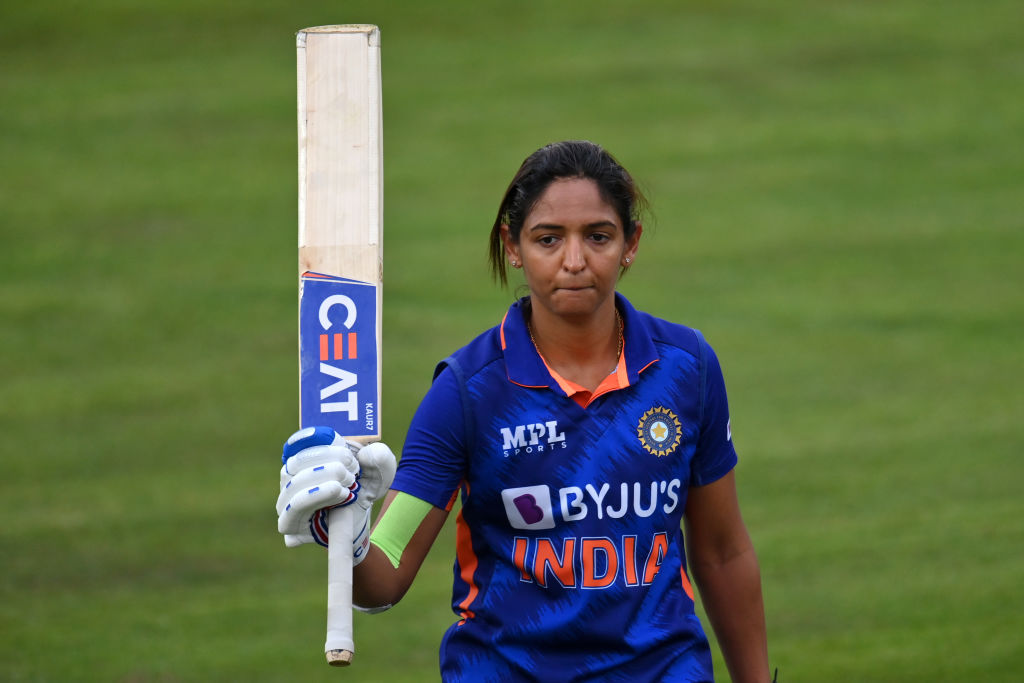 Harmanpreet Kaur of India acknowledges the crowd after scoring 143 not out during the 2nd Royal London ODI between England Women and India Women at The Spitfire Ground on September 21, 2022 in Canterbury, England. (Photo by Justin Setterfield/Getty Images)

Indian captain Harmanpreet Kaur’s unbeaten century and a brilliant spell from pacer Renuka Singh helped the Women in Blue defeat England by 88 runs in the second one-day international of the three-match series at St Lawrence Ground, Canterbury, on Wednesday (21) to clinch the series with a match to go. Kaur was picked as the player of the match.

It was also India women’s first series win in England since 1999.

After the home team won the toss and asked them to bat first, India registered 333/5 in 50 overs — their highest total on English soil — thanks to Kaur’s unbeaten 143 off 111 balls with 18 fours and four sixes. She had a 113-run partnership for the fourth wicket with Harleen Deol who scored 58 off 72 balls.

Opener Smriti Mandhana hit 40 off 51 balls to become the quickest among Indian women to complete 3,000 runs in the 50-over format. Her 54-run partnership with wicket-keeper-batter Yastika Bhatia for the second wicket was also key for India’s batting.

Chasing the mammoth target (it was India’s highest score on England soil), the hosts failed to tackle Singh well as she clinched four wickets for 57 runs. Danni Wyatt (65), Alice Capsey (39), and captain Amy Jones (39) offered some resistance but England never looked in the contest and were all out for 245 in 44.2 overs. Spinners Dayalan Hemalatha (2), Deepti Sharma (1) and Shafali Verma (1), who bowls part time spin, took four others. The England innings also saw two run-outs that hit their chase more.

The India women won the first match at Hove by seven wickets after Mandhana slammed 91.

The final match will be played at Lord’s on Saturday (24).